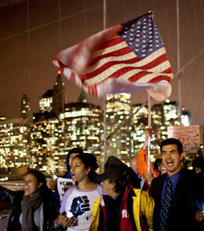 The Heart of the Creed: Empathy, Human Rights and Democracy

In order to value human rights, it first is necessary to have empathy, to see other people as human. This may appear obvious to us now, but for Europeans, it was in the 18th century only that people began to be seen as being autonomous, equal human beings. Prior to that time, many kinds of people, such as servants, slaves, children, women and people without property were not regarded as autonomous individuals who employed independent moral judgment.

Empathy is key in recognizing human rights and creating democracy. From a psycho-spiritual perspective, recognizing another person’s humanity and therefore their human rights, is a sign of emotional and spiritual maturity. Society has many ways of ranking people, but the moral value implicit in the Creed, i.e., the self-evident assertion that all people are created equal, tells us that our innate worth transcends any social ranking.

A cornerstone principle behind a human-centered approach to modern marketing is being empathetic to the goals of humans – in our case your users, customers, and buyers. Empathy will serve as the driving force behind the power of #H…

For Stanford researcher Emma Seppala, it’s our connections with others that matter most. “One telling study showed that lack of social connection is a greater detriment to health than obesity, smoking and high blood pressur…