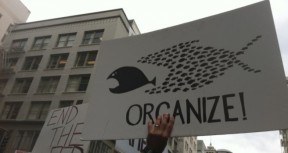 It’s been a while since empathy — the uniquely human capacity to recognize and share the feelings experienced by others, that science even suggests is hardwired in us — when President Obama included it in the qualities he sought in a Supreme Court appointee, and conservatives from Glenn Beck to Sen. Jim Sessions. So I was surprised to see columnist David Brooks turn the spotlight on empathy again.

However, when I put it in the context of popular and growing movements like Occupy Wall Street and We are the 99 Percent, and even the movements in Wisconsin and Ohio, I was not surprised to see Brooks holding forth on the shortcomings of empathy. The success of these progressive movements constitute a powerful challenge to conservatives.

Brooks: “The problem comes when we try to turn feeling into action. Empathy makes you more aware of other people’s suffering, but it’s not clear it actually motivates you to take moral action or prevents you from taking immoral action.

Empathy orients you toward moral action, but it doesn’t seem to help much when that action comes at a personal cost. You may feel a pang for the homeless guy on the other side of the street, but the odds are that you are not going to cross the street to give him a dollar.”

One parent reflects on the painful side of empathy when tragedy strikesI needed a minute. With tears streaming down my face, all I could think of was that empathy really sucks. I really truly did not want to feel what those other mothers must be feelin…

As parents, it is our responsibility to do what we can to make sure that our children aren’t bullies (besides hide behind our pure intentions and upstanding values).   The good news is that we can consciously raise kids who are more likely t…

If I offer my heart to you will you take care of it with tenderness or am I going to be exposed to something I don’t want to be?Empathy is delicate thing. It’s a direct connection between hearts. Will you be there during my darkest hour or …

Jeb goes full Rambo on ISIS, saying ‘We should have no empathy for our enemies’ as he slams new Guantanamo terrorist releases as ‘Alice in Wonderland logic’ ‘We should destroy them, plain and simple, which means a strategy in the Middle East to do…