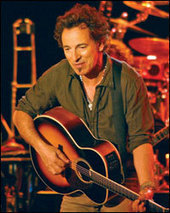 Bruce Springsteen reinterprets the songbook of American folk legend Pete Seeger on his album We Shall Overcome. He talks about Seeger’s music, the creative process and the importance of an adventurous audience.

BLOCK: When Pete Seeger did these songs he was steeped in this music, and it was bound up with all of the causes that he was so deeply involved with. So if he was singing We Shall Overcome he’d be at a civil rights rally, or I bet if he was at a union rally he be singing Pay Me My Money Down. I wondered if you wrestled with authenticity here, and did this feel like putting on somebody else’s clothing in a way?

Mr. SPRINGSTEEN: Well you’re always doing that. Your job is putting on somebody else’s clothes. You know, that’s sort of, the act of making music and making art is, a very large part of it is an act of imagination. And not only imagination, but how well you, it’s also a tremendous act of empathy, of course. And part of doing you job well is being able to slip into somebody else’s shoes and finding out what you have in common with them, and therefore bringing your audience closer to those characters and to those people.

Rats are empathic and will help other rats in need   Humans like to believe they are special. With the Christmas season ahead, compassion is on our mind. We often feel that compassion makes humans noble, it seems to elevate us above the other, se…

Empathy is often thought of as the ability to imagine life from the perspective of someone else. Yet for a Christian, empathy needs to be so much more.You see, the Bible tells us over and over again not to just imagine what life is like for others, but…

No, America does not have a gun problem. Americans have an empathy problem.I feel as though I have to define that word. So few people seem to have a grasp of what it means. In my eyes, anyway.Empathy is the means, ability and will to consciously consid…

“I’m writing a book on empathy,” psychologist Paul Bloom tells people. They respond warmly, until he follows up with, “I’m against it.” On this episode of Rationally Speaking, Julia and Paul discuss what empathy is, why Paul is concerned that it’s a te…