Home » News » Neurology: A Mirror to the World 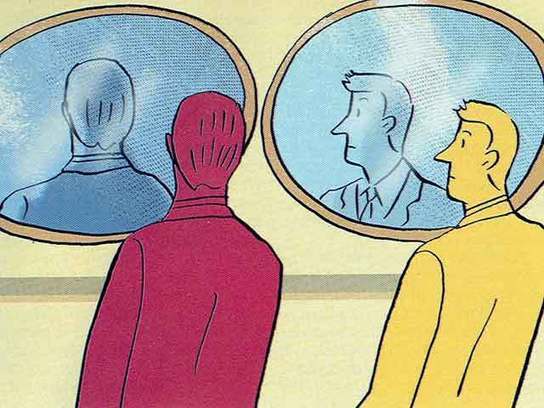 Christian Keysers has a good way of making his point.  He shows his audience a clip from a James Bond movie in which a large, hairy spider is climbing over our hero’s naked body.  He then asks the audience what they think the actor playing Bond is feeling.

It is impossible to tell, of course, whether Sean Connery was really revolted and fearful when the scene was being shot, or whether he was actually indifferent, but just acting well.  The point is that the observer can feel – literally feel – Bond’s fear.  This ability not merely to know in an intellectual sense what someone else is feeling, but actually to feel it with them, is an important social attribute.

Dramatists, novelists and psychologists have known about it for centuries, of course.

And those who lack it, such as people who are autistic, are at a social disadvantage.  But it is only in the past few years that its neurological basis has begun to be understood.  It seems to rely on a type of nerve cell known as a mirror neuron.  Dr Keysers, who works at the University of Groningen, in the Netherlands, is one of a band of neurologists that is studying them

Being cut off from our own natural self-compassion is one of the greatest impairments we can suffer. Along with our ability to feel our own pain go our best hopes for healing, dignity and love. What seems nonadapative and self-harming in the present wa…

Kidney transplant patients are at increased risk for readmissions when complicated post-discharge instructions and lack of empathy from their caregivers compound their stress levels, according to research published in the Journal of Surgical Resea…