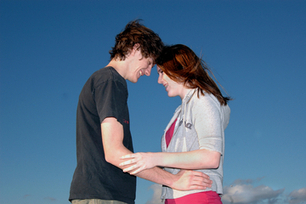 A nasal-spray puff of the so-called “love hormone” might improve your ability to interpret other people’s emotions.

In the study, researchers in Norway gave 40 students nasal spray containing either a control dose of saltwater or a dose of oxytocin, a brain hormone known to boost feelings of calm and social bonding. The students were then shown photos of faces with angry, happy or neutral expressions. Some of the faces had more subtle emotional expressions that are typically decoded at a more subconscious level, according to the Research Council of Norway, which funded the study.

It’s noteworthy, and undeniable, that two antonyms of empathy—disdain and indifference—have become cornerstones of American politics.  When outsiders are routinely reviled, targeted for blame by an impulsive population that isn’t…

Using a red hat and a camera, Heather Zinger is encouraging empathy and union. The Fargo artist started her “Red Hat Project” in October and plans to have a photograph taken of her and at least one other person swapping hats and …

Do animals possess empathy? A loaded question. A couple of recent studies have claimed they do (think of rescue rats and yawning dogs). But, as I asked in the post about the yawning dog study, is that really what is shown? A recent article in Biology L…