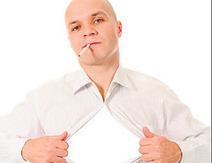 Narcissism, or excessive love of oneself, is not just an unattractive trait, it’s physically damaging for men too, scientists say.

Researchers at the University of Michigan found that men who have this personality trait — characterised by a sense of grandiosity, entitlement and low empathy — may also have to suffer in terms of their physical health due to more stress encountered in daily activities.

However, this does not appear to be the case for women, found the study, LiveScience reported.

Even though empathy is something that everyone strives for and is taught at a very early age, empathy used to the extreme can allow someone to erase their own needs, emotions and frustrations for the sake of another person.It is so easy to forget about…

“We have created a culture of humiliation. There is another price tag to public shaming. The price is not measured in the cost to the victim but rather the price measured by the profit of those that prey on them. The violation of others is ruthlessly m…

Follow these three steps, and you’ll help your child learn to understand and share experiences and emotions. Model empathy. Children learn by watching their parents, caregivers and teachers. To teach empathy, model empathy. One way is …

Use Virtual Reality as an “Empathy Machine”While the biggest problem for nonprofit organizations is the physical and emotional distance between donors and those in need, the biggest benefit of virtual reality is that you can be somewhere physically and…