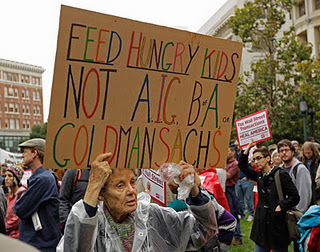 The OccupyOakland I visited on October 15th was not a protest. You could say that I knew it, because I have read about it before I was there. I still couldn’t understand it fully until I saw what it meant. I suspect the same is true elsewhere, though I will not presume to know.

A protest, in some fundamental way, engages with the existing power structures. What I saw, instead, was a parallel existence. This was not a march attempting to make something happen through demands and goals. What I saw was a gathering of people without any urgency, setting up camp, providing free services, engaged in the activities of making life happen, engaged in educating each other, curious to learn, and intent on inclusion. In an earlier post I was expressing some concern about the absence of a vision. What I saw in the park changed my perspective. I was fully humbled. There is absolutely no absence of vision. In fact, what was so compelling for me in being there was seeing a vision being lived out. They are not making demands. Instead, in their own small way, and however imperfectly, they are creating the world in which they want to live. There is free food being served 24/7, there are supplies of all kinds, energy created by people pedaling a bike, and everyone appears to be part of an incessant conversation.

I see an astonishing potential for this form of action that I hadn’t considered previously. It makes for a movement that has no clear end point. There is nothing someone else can do in any immediate way that will give the people gathered at the park in Oakland what they are already creating for themselves. I can’t imagine what would happen, or a set of actions on the part of anyone, that would lead people to say “Now we are done and we can go home to our daily living.” They didn’t seem particularly interested in that form of daily living that has become the norm in this country. It is, in fact, that very form of daily living that this movement seems to me to be challenging.

Is their core method a conscious choice on anyone’s part? Whether or not it is, the result is confusion for many. I was confused enough to not see their vision until I was there. Having been there, I now know why I didn’t see it. The vision is not being articulated, it is only lived, as best the occupiers know how. The action is broad enough, and the articulation is sparse enough that many of us can interpret the actions as manifestations of a vision we have. Indeed, many, including myself, have done so. I can certainly see what is happening as an example and precursor to the vision of a world based on caring for human needs. Some are also urging the movement to follow specific strategies, to articulate certain demands, to go for certain goals.

The lack of clarity about the difference between demands and vision continues. I am still wishing that some vision, or many visions, were articulated even in the absence of demands. I still suspect that many would find it hard to express the positive vision they are trying to live. I imagine that were they to do so, perhaps more people would grasp what they are trying to do and be inspired, because vision tends to attract people. No accident that one of Martin Luther King Jr.’s most famous speeches was about dreaming. That being said, I don’t know what is true. My humility grows daily about this movement.

There is also a way in which talking about “a movement” is misleading. Yes, there is a tremendous amount of thought and care that’s being put into coordination, logistics, and all other aspects of continuing this massive experiment. And yet much of what happens, including actual protest actions that are taking place alongside and within this attempt to step outside the norms of living, happens through people taking spontaneous, autonomous steps.

What is most striking to me of all is how much I don’t know. I don’t know if anyone, anywhere, has the capacity to predict what could happen as a result of this new form of action. This movement has outgrown our capacity to categorize, analyze, and predict. It’s already bigger than anyone’s decision making capacity. No one can tell the people on the street what to do. I feel a slight bit of discomfort, and a whole lot of curiosity and interest in accompanying this surge. In this moment, more than anything, I see this movement as part of a large wakeup call that life is issuing to itself.

The group of people that took possession of the Frank Ogawa Plaza in Oakland are creating a small scale experiment in living without relying on large institutions. Anyone can join, anyone can contribute, anyone can challenge, and anyone can talk. Why would that ever want to stop?

Stay tuned for more Notes from OccupyOakland. Since writing this piece I have been to OccupyOakland once more. I attended a meeting of the newly created Nonviolence Caucus (meets daily as of October 18th, an hour before the General Assembly, by the kids’ play area) and participated in the General Assembly meeting. I plan on posting my impressions of these conversations in the next couple of days.

Empathy is the most fundamental building block of any relationship.

The concept is that if you are able to think about your partner and what they are thinking and feeling, it may make you feel more connected to him or her. It may take some practice.
…

As demands on health care providers increase, compassion becomes more difficult to sustain. But a new training holds the promise of helping them meet those challenges. CCARE developed the Compassion Cultivation Training (CCT) Through &nb…

Compassion research is at a tipping point: Overwhelming evidence suggests compassion is good for our health and good for the world. Given the importance of compassion in our world today, and a growing body of evidence about the benefits of compas…