Home » News » Message of American renewal: ‘We’ll have to reignite the embers of empathy’ – Chicago Sun-Times 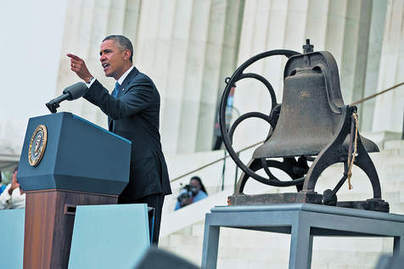 For America to move forward, to become more just and strong, we need to put “united” back into the United States.

That was the message a passionate President Barack Obama brought to the Lincoln Memorial Wednesday as he spoke on the 50th anniversary of the historic March on Washington. The president called on all Americans to put aside their differences and work to make good jobs, education and health care a reality for everyone willing to work for them.

To do that, he said, “We’ll have to reignite the embers of empathy and fellow feeling.”

…Those are challenges, but they are no greater than the barriers faced by the marchers of a half century ago. Those determined idealists forced huge changes for the better, and we can do so again.

If we can find within ourselves the empathy to walk in another’s shoes.

Posts about empathy poster written by Christof ZürnInspired by the d.school’s empathy map I designed a poster that can be used in focus group meetings or any other research or interview situation. While asking questions and ob…

Why, in a country that consumes 25% of the world’s resources (the U.S.), is there an epidemic of loneliness, depression, and anxiety? Why do so many in the West who have all of their basic needs met still feel impoverished? While some politi…

A child research centre is calling for empathy classes to be made part of the school curriculum.Prof Dolan said the centre was doing a lot of work on empathy development in children.”There is a role for learned, value-based empathy education in schools…

New initiatives are encouraging doctors to be better listeners and more sensitive to patients.The University of Michigan, the Cleveland Clinic and some Catholic health systems are among medical systems experimenting with techniques to encourage physici…