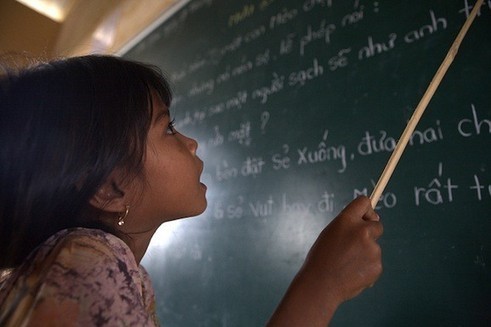 If we want to build empathy, America needs to get talking! So how can you turn language learning into empathy-building?

What do highly empathetic people do? “They talk. They listen. They understand.
They start to speak each
other’s language.

In the effort to promote empathy, it’s key that foreign languages are part of the conversation. Language learning is an empathy-building exercise. It builds tolerance and demonstrates respect. And it forces us to realize that our own culture is not universal. Yet, America is falling behind. It’s a problem that the Modern Language Association calls “the nation’s language deficit.”

Undergraduates are learning languages at half the rate they were in 1965. In particular, we’re not learning some of the languages most relevant to a changing world. Javanese is more widely spoken than French, German, and Italian, but was studied by only one college student in America in 2009. Similarly, few students are learning other languages among the top 15 most spoken: Bengali, Lahnda, Hindi and Telugu, to name a few. Today, we’re missing the opportunity to communicate with the vast majority of the globe.

Learn Embodying Empathy: Dance/Movement Therapy after Unthinkable TraumaSee it on Scoop.it, via Empathy and Compassion

A new study suggests chimpanzees may show some of the same sensibility about fairness that humans do. Mammals such as wolves, orcas and elephants need their groups to survive, and empathy and cooperation are survival mechanisms. De Waal discusses…