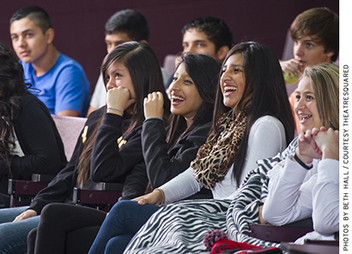 We also employed a measure known as the Reading the Mind in the Eyes Test (RMET), which captures the ability to infer what other people are thinking or feeling by looking at their eyes.

The test was developed by British psychologist Simon Baron-Cohen and his colleagues as a tool for studying theory of mind, particularly for people with autism.

It is now widely used by researchers interested in studying theory of mind and empathy for people developing typically, as well as for those with autism.

Researchers using RMET have found that reading literary fiction or engaging in theatrical role-playing enhances people’s ability to read the emotions of others. We suspected that watching live theater might have a similar effect and decided to include RMET in our survey.

The version of RMET we employed was developed for use with adolescents and has 28 photographs cropped to show only people’s eyes. Subjects are asked to pick one of four words that best describes what the photographed person is thinking or feeling.

Cruelty preoccupies me. I find that stories of cruelty stay with me, hauntingly, and infiltrate deeply. I cannot conceive of it in its most basic elements, the physical act of hurting another person. Unintentional psychic injuries against others are al…

​Empathy is the one discipline that can make or break your innovation work. And, as Daniel Pink wrote,

“Not only is empathy hard to outsource and automate, but it makes the world a better place.” So how do we make empathy a discipline when we are looking to accelerate and scale impact through innovation in our organizations, programs, and products?

We’ll cover concrete ways that you can implement, and share lessons learned from years of experience.