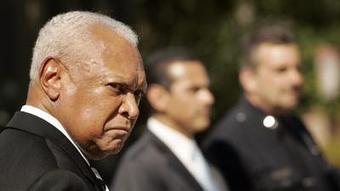 The Los Angeles Police Department received the go-ahead Tuesday to launch an experimental mediation program that would bring officers face-to-face with people who have accused them of racial profiling.

The three-year pilot program, unanimously approved by the Police Commission, will give an officer accused of racial profiling and his accuser the option in some cases of meeting to discuss the encounter where the alleged profiling occurred. Participation in the meetings will be voluntary for both sides, and volunteers trained by city officials will be neutral mediators during the sessions.

The goal, LAPD Cmdr. Rick Webb said, is to have officers and their accusers “stand in each other’s shoes.”

The initiative is the latest effort by LAPD officials to rethink the way the department addresses an accusation made hundreds of times each year — that an officer targeted someone for a traffic stop or some other type of detention because of that person’s race.

The issue of racial profiling — “biased policing,” in modern LAPD lingo — has dogged the department for years as it has tried to leave behind a reputation of racism and excessive force that is still felt in minority communities.

Profiling complaints typically occur after a traffic or pedestrian stop, when the officer is accused of singling out a person solely because of his or her race, ethnicity, religious attire or some other form of outward appearance.

Department records have shown that in at least several thousand cases spanning many years, no officer was found guilty of racial profiling in internal LAPD investigations. That track record left members of the commission increasingly angry and incredulous. Their ire was inflamed by former Chief William J. Bratton, who held firm to the belief that there was little the department could do to investigate profiling cases because, he said, it was impossible to know what an officer was thinking at the time of a stop.

As pressure for change mounted, Bratton’s successor, Charlie Beck, has overseen reforms on how racial profiling cases are handled. In the most serious cases, instead of trying to discern whether an officer acted out of racial bias, a specialized team of investigators now looks at the more concrete question of whether officers violated a person’s constitutional rights.

The new approach led police officials to conclude that one officer racial profiled motorists after investigators determined the officer stopped a disproportionate number of Latino drivers and deliberately misidentified them in department records as white. A disciplinary panel voted to fire the officer, although it was unclear whether the panel upheld the charge of racial profiling or fired the officer for a lesser infraction.

By contrast, the mediation program will be used in more run-of-the-mill profiling cases, in which there are no allegations of physical abuse, racial insults or other serious misconduct, Webb told the commission.

If an officer is found to have participated in the mediation session in good faith, the department’s internal investigation into the allegations against the officer will be closed, Webb said. Officers with two prior complaints in the previous year will not be eligible.

A director from the union that represents LAPD rank-and-file officers told the commission Tuesday that the union supported the mediation plan and has instructed officers to participate.

Commissioner John Mack, a civil rights leader who has pushed for changes to the department’s handling of racial profiling, praised the plan for mediation. “I am hopeful and optimistic,” he said. “I think there is a lot of potential here. It could really offer the opportunity to help resolve some of these issues.”

Los Angeles is not the first city to try mediation to resolve friction between officers and the people left upset by encounters with them. San Francisco has had a long-running mediation program.

A study conducted at the University of Wisconsin-Madison has successfully shown that human stem cells can implant themselves into the brain and heal neurological problems. The experiment was conducted using mice, and it showed that impl…

A new documentary peels back the curtain on the problem of food insecurity in the U.S. It shows that hunger and obesity are more closely connected than many of us realize.Jim Manske’s insight:This is social change!See it on Scoop.it, via Radical Compa…