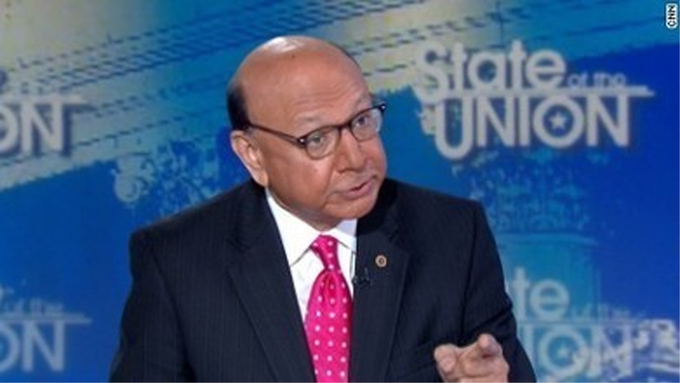 KHAN: That’s, again, height of ignorance on a part of a candidate for the highest office of this nation. Two things are absolutely necessary in any leader or any person that aspires, wishes, to be a leader.

That is moral compass and second is empathy. This candidate is void of both traits that are necessary for the stewardship of this country.

ACOSTA: You don’t believe he’s fit to be president?

KHAN: I do not believe his whole year-long rhetoric, division, excluding people, talking about them derogatorily, has prepared him. He promised to the Republican leadership that he will change his manner, he will not be as ignorant as he had been. But he had continued.

Those two traits of moral compass and empathy are absolutely necessary for the leader of a free world leader of nation like United States. …

This person is total incapable of empathy. I want his family to counsel him, teach him some empathy. He will be a better person if he could become — but he is a black soul. And this is totally unfit for the leadership of this beautiful country, the love and affection that we have received affirms that our beliefs, our experience in this country had been correct and positive. The world is receiving us like we have never seen. They have seen the blackness of his character, of his soul, that he is void of recognizing, empathizing with people.

How a simple conversation can help stop schoolyard bullyingNo two children are alike, and when you throw a bunch of very different individuals into a social setting, like the playground, you are bound to have problems. Young children may get bullied or…

Older Version – Active Listening Clip 1See it on Scoop.it, via Empathy and Compassion

EMPATHY:  the action of understanding, being aware of, being sensitive to another person’s feelings.  Put yourself in someone else’s shoes.See it on Scoop.it, via Empathy and Compassion