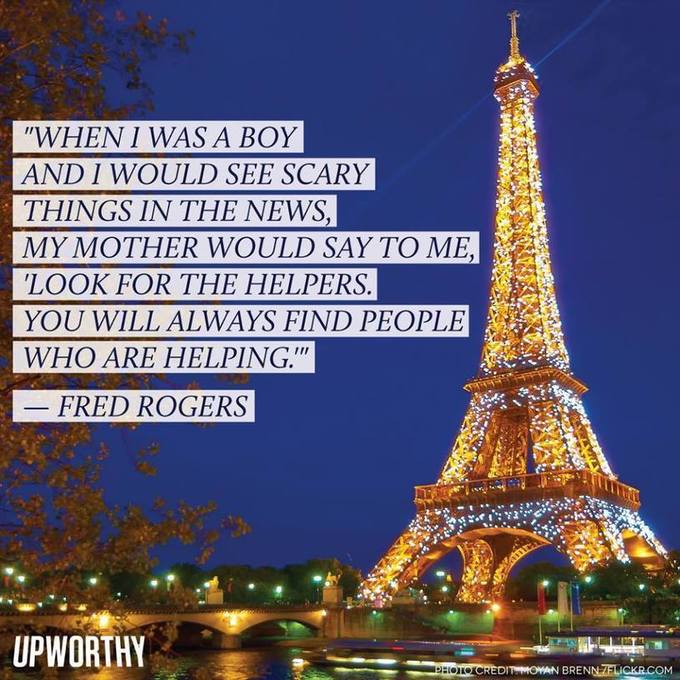 After the recent attacks in Paris, the Dalai Lama said: “Unless we make serious attempts to achieve peace, we will continue to see a replay of the mayhem humanity experienced in the 20th century.” It’s easy to feel helpless when watching the news or thinking about how deeply rooted the suffering is in this situation and in many other situations of conflict around the world today. When a person watches a relative die in a conflict, their contempt for the other side can last a lifetime. There are so many powerful people and strong forces at play, what can we really do?

One answer I came up with is be a force that helps build an army of compassion.

The fact is I can do this and you can too.

Life is full of actions and reactions. This is what makes up the world around us from the trees we see, to the relationships that are kindled and to the babies that come from them. Every single thing we do matters. When Mahatma Ghandi said, “Be the change you want to see in the world,” underlying that was the simple assumption that everything we do matters. Now we know the science behind the wisdom of his words, and why all the compassionate acts we do can have a significant impact on our mental health and a potential healing in the world.

In the same way, we can have this impact not only on our mental health, but on the relationships that surround us and the world as a whole. You may not be a single force in solving the Middle East conflict or in reversing global warming, but everything you do matters. In order to better understand why everything you do matters, it’s important to understand how emotional contagion works:

The social scientists Nicholas Christakis, MD, PhD, and James Fowler, PhD, conducted a study to look at the effect of social networks. To determine if there was a causal relationship for obesity, they mapped the relationships of 12,067 people who had more than 50,000 connections to other people that were assessed repeatedly from 1971 to 2003 (not online social networks such as Facebook but physical networks of people). They found that, indeed, “birds of a feather flock together.” However, they found something much more interesting: obesity doesn’t start and stop with immediate friends and family; it is “contagious” by up to three degrees of separation.

They also went on to find that loneliness and happiness are contagious by three degrees and that each person you have in your life that feels well boosts your chance of feeling well by 9%. In other words, the way people behave is contagious and causes a ripple effect across friends of friends of friends.

It stands to reason that our compassionate acts will do the same, slowly building an army of compassion.

Think of it this way, “When carbon atoms are arranged in a specific way, they make a diamond, but the diamond is not in each carbon atom. In the same way, each of our roles in mindfully engaging life can create a much larger social effect that is greater than each of us alone, having a significant influence on shaping our culture for the years to come and providing enormous healing.” ~ The Now Effect

Starting right now, get clear on what you can do to boost your experience of compassion in this world. What is something you care about that is greater than yourself? Maybe it’s the planet, or helping distressed people within your country or outside your country, or making a political impact.

Something simple is to begin with a lovingkindness practice, holding all the people who have been traumatized around the world by these attacks (maybe including you) and sending them intentions of peace, ease, health and relief from fear and suffering. May we all someday be at peace.

Anybody that says that a practice this is new age nonsense and of no use, is ignorant to the current science and neuroscience of not only this practice, but how powerful our minds truly are. Compassion-based meditations have the power to reduce fear and diffuse anger which are often the antecedents to the brain making decisions around violent actions.

However, you can also look into other ways to help the victims of the attacks.

Taking action alongside these values not only will make you feel good, but will also have reverberations that make this world a better place. It’s important to focus on what we can do, not only what we can’t do.

Compassion starts with us and one-by-one we can build an army of compassion that spreads  through emotional contagion, impacts political systems and creates a greater sense of safety, connection and well-being.

As Henry Ford once said, “Whether you believe you can or can’t, you’re right.” Belief is a very powerful thing here.

“Gratitude is not only the greatest of virtues, but the parent of all others.” ~Cicero Being grateful or practicing gratitude has many benefits, including improving our health, relationships, careers, sleep, and self-esteem, to name ju…

A group of New York teens have put a musical spin on their anti-bullying efforts.See it on Scoop.it, via Radical Compassion

A survivor of sexual assault. Her silence has a voice of its own.   CL 10 graduate Meena Serendib is working on a social change project utilizing film to explore surviving date rape.  Please check out the request video and consider supportin…