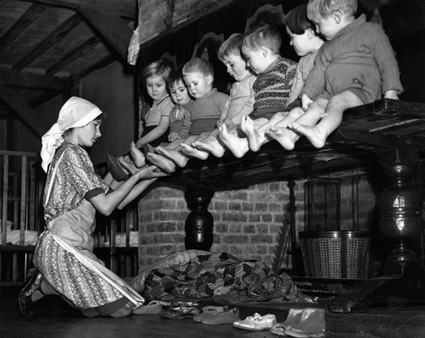 Often depicted as a feel-good emotion and “soft” skill, empathy can be a powerful secular force for social and political transformation

Evacuation produced an unprecedented explosion of mass empathic understanding, by enabling rural people to step into the lives of the urban poor.

Although they hadn’t observed the squalor of East End tenements with their own eyes, they were able to hear first-hand accounts from the children and to see the terrible consequences of poverty standing before them (even if they didn’t always want their grubby little guests to sit on their nice settees…

Empathy has been a vital – though neglected – secular moral force bringing about social and political change throughout history.

While empathy is never the whole story, it has been a crucial factor in the struggle for human rights and social justice since at least the eighteenth century, and continues to be a key driver of progressive change today.

Self-compassion is better for our health and well-being than self-esteem, bringing more empathy and less harsh self-criticism…   Most of us have been taught far less about the importance of having compassion for ourselves as well. A newly emergi…

Feeling empathy for others who are experiencing emotional or social pain may also cause a person to feel physical pain, according to new research.In the study, scientists from the International School for Advance Studies (SISSA) in Italy showed partici…

“A Little Book About Empathy” is an interactive storybook that gives the readers the choice to select who they want to be, experiencing the story from different points of view. The audience for this project is mainly kids who are learning the meaning o…

People can feel pain just by witnessing others in agony, according to a new study. Researchers at Monash University looked into the phenomenon known as somatic contagion and found that almost one in three people could feel pain when they see other…