Home » News » Is empathy enough? David Brooks has an interesting essay in the New York Times 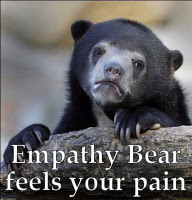 David Brooks has an interesting essay in the New York Times called The Limits of Empathy. In it he discusses the wealth of research published lately on how empathy works as a psychological response, and makes a case that it can’t and shouldn’t be considered the true foundation for morality. This is because the reaction of empathy doesn’t always kick in when it ideally should, to the extent that it should:

Empathy orients you toward moral action, but it doesn’t seem to help much when that action comes at a personal cost. You may feel a pang for the homeless guy on the other side of the street, but the odds are that you are not going to cross the street to give him a dollar.

Marine biologists and philosophers have joined forces to support a controversial declaration of rights for whales and dolphins on the grounds that their astonishing intelligence and emotional empathy puts them on a par with humans.   Research int…

Influential author and speaker Dr Brené Brown tackles the myth that vulnerability is a weakness. Instead, she argues, it is the clearest path to courage and meaningful connection, and has the power to transform the way we engage and educate.See …

A new study on empathy at the University of Virginia is shining a light on how our brains understand friendship. Researchers set out to answer the question, how does the brain create a map of ‘the self’ and ‘the other’? To find out, th…