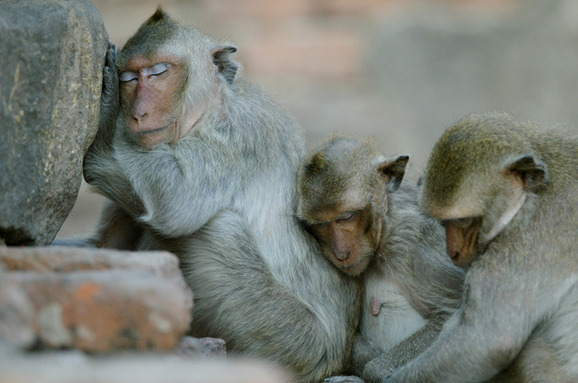 New research shows there is a biological basis for co-operative and empathetic behaviour.

“Darwin was much smarter than most of his followers,” said de Waal, quoting from Darwin’s The Descent of Man that animals that developed “well-marked social instincts would inevitably acquire a moral sense or conscience”.

De Waal showed the audience videos from laboratories revealing the dramatic emotional distress of a monkey denied a treat that another monkey received; and of a rat giving up chocolate in order to help another rat escape from a trap.

“Human morality is unthinkable without empathy.”

by Ken Stern and Cary NelsonWe sympathize with the students who say they are being forced to “choose sides,” when they insist they want to be both pro-Israel AND pro-Palestinian, but there is little space for them on campus. These students …

In short, my empathy for others plummeted as my anxiety mounted—and a recent paper helps explain this phenomenon by linking anxiety to egocentrism. In doing so, it provides yet another reason why cultivating empathy is so crucial…&nbs…

A recent neuroimaging study by NeuRA researcher Dr Muireann Irish has revealed why some people with dementia lose their ability to empathise.The focus of Neuroscience Research Australia, or NeuRA, has always been on neuroscience. We conduct clinical an…

Educational psychologist and author, Michele Borba, shares her decade-long journey to discover how to optimize human potential. Surprisingly, it was children from Canada to Rwanda who offered the three best ideas to cultivate empathy. The best news: if…