Home » News » How to buy happiness 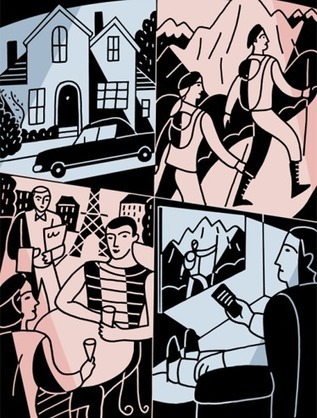 Imagine that you woke up tomorrow morning to discover $1 million under your mattress. Leaving aside the obvious lumpiness issue, take a moment to think: What would you do with that cash?

If you’re like many people, contemplating your newfound wealth would probably make you think about one thing above all else: yourself. A growing body of research shows that the mere whiff of money draws out our selfish sides, focusing us on what that money can do for us, and us alone. Perhaps you imagined buying a raft of new possessions: a faster car, a high-end gas grill with rear rotisserie or even a new house, with a fancy rain shower in your commodious bathroom.

It’s hard to imagine anything nicer than shampooing in your private tropical rain forest. But studies by a generation of behavioral scientists show that material goods often fail to deliver lasting happiness. Fortunately, our ongoing research offers a host of ways to wring more happiness out of every dollar you spend. And what’s more, you don’t need to be a millionaire to reap the benefits of happy money. Changing how you spend as little as $5 can lead to measurable increases in your happiness.

But making these changes requires challenging some of our fundamental assumptions about spending. It’s hard not to view buying a house — which most Americans continue to see as a central part of the American dream — as a sensible investment. But new research shows that purchasing a home buys very little happiness.

A study of women in the United States found that homeowners were no happier than renters, on average. And even if you’re currently living in a cramped basement suite, you may find that moving to a nicer home has surprisingly little impact on your overall happiness. Researchers followed thousands of people in Germany who moved to a new home because there was something they didn’t like about their old home. In the five years after relocating, the residents reported a significant increase in satisfaction with their housing, but their overall satisfaction with their lives didn’t budge.

So, diligently saving up for a down payment might not be such a good idea if it means skipping after-work beers with friends or your annual Valentine’s Day celebration at a favorite restaurant.

And dozens of studies show that people get more happiness from buying experiences than from buying material things. Experiential purchases — such as trips, concerts and special meals — are more deeply connected to our sense of self, making us who we are. And while it’s anyone’s guess where the American housing market is headed, the value of experiences tends to grow over time, becoming rosier in the rearview mirror of memory.

And experiences come with one more benefit: They tend to bring us closer to other people, whereas material things are more often enjoyed alone. (We tend to watch our new television alone on the couch, but we rarely head to a wonderful restaurant or jet off to Thailand solo.) Decades of research point to the importance of social contact for improving mental and physical health.

So, doing things with other people makes a difference for happiness, and our research suggests that doing things for other people can provide an additional boost. In experiments we’ve conducted around the world, including in Canada, the United States, Uganda and South Africa, we find that people are happier if they spend money on others. And we’ve found that spending even just a few dollars on someone else provides more happiness than using the cash to treat yourself.

If experiences increase happiness and giving increases happiness, can we combine them to create the perfect happiness intervention? We tried this in a recent experiment, in which we handed out Starbucks gift cards on a university campus.

Who was happiest? Those who treated someone else and shared in that experience with them. So the cost of increasing your happiness may be as cheap as two cups of coffee.

Taken together, the new science of spending points to a surprising conclusion: How we use our money may matter as much or more than how much of it we’ve got. Which means that rather than waiting to see whether you find $1 million under your mattress tomorrow, you can make yourself happier today. Switching your spending to buying experiences — for both yourself and others — can lead to more happiness than even the most amazingly Amazonian rain shower.

In my new book, “Spontaneous Happiness,” I write about lifestyle practices that can help people achieve and maintain happy lives. Bear in mind that by “happy,” I am not referring to endless bliss. Despite what many in the media proclaim these days, suc…

Could news make you unhappy? There’s a good article and some recent research that gives us more insight about the facts and what you can do about it.See it on Scoop.it, via Radical Compassion

The peacemaker or mediator is often thought of as “neutral”, impartial or encouraging compromise. Another model, based on the principles of Nonviolent Communication, is to be a vigorous advocate for a process and solutions that value e…