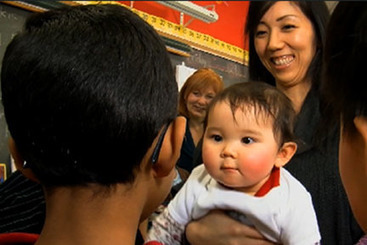 A new study finds that the key to raising moral kids lies with the parents’ sense of empathy and injustice.

Parents: Do you want to raise a child with a strong sense of right and wrong? You might want to start by cultivating your own morality—as well as your own empathy.

A new study from the University of Chicago suggests that parents’ sensitivity to both other people’s feelings and to injustice may influence early moral development in their children.

Developmental neuroscientist Jean Decety and his colleague, Jason Cowell, brought a group of one year olds into the lab to test them on their reactions to moral situations. The seventy-three toddlers watched animated videos in which characters engaged in helping and sharing (prosocial) behaviors or pushing, tripping, and shoving (antisocial) behaviors while the researchers monitored the toddlers’ eye movements and measured their brain wave patterns using an electroencephalogram, or EEG.

Everybody’s suddenly talking about empathy, from the Dalai Lama to agony aunts, from business gurus to happiness experts. And it’s not surprising, since in the last decade neuroscientists have discovered that 98 per cent of us have empathy …

Stressed men become egocentric, women don’t. Male individuals under stress tend to be more self-centred and less able to distinguish their own emotions and intentions from those of other people.Women instead are truly empathic…

Recently, her team has been investigating networks in the brain that appear to have a role in empathy. She’s found evidence for two types of empathy, each tied to a different network of brain regions. One type she calls mental empathy, …

George Lewis and Edwin Rutsch: Dialogs on How to Build a Culture of Empathy with Photography George Lewis is a photographer exploring the nature of empathy. He says, “For me, one of the greatest challenges of the 21st century is to make…