Home » News » Hillary: We Must Empathize With America’s Enemies – YouTube 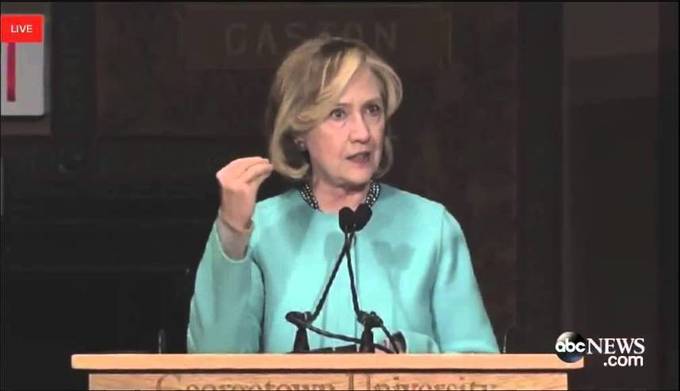 Hillary: We Must Empathize With America’s Enemies
http://www.weeklystandard.com/blogs/hillary-we-must-empathize-americas-enemies_820584.html

“This is what we call smart power,” Clinton said to a small audience at Georgetown. “Using every possible tool and partner to advance peace and security. Leaving no one on the sidelines. Showing respect even for one’s enemies.

Trying to understand, in so far as psychologically possible, empathize with their perspective and point of view.

Helping to define the problems, determine the solutions. That is what we believe in the 21st century will change — change the prospects for peace.”

Clinton served as secretary of state for the first four years of the Barack Obama presidency. She’s considered a likely presidential candidate for the 2016 election.

According to a group of scientists from the Case Western Reserve University and Babson University, there is a clear demarcation between the parts of the brain utilized for religious belief and critical thinking. The study found that people who are more…

If there were only one skill that we could develop more fully in order to reduce conflict, it would be the ability to empathize. When we empathize with another, we use verbal and non-verbal cues to learn and understand what another person is experienci…

It turns out psychologists may have gotten it wrong. Over the years, there has been a tremendous emphasis in our society on building kids’ self-esteem. Psychologists now think we should be teaching children how to develop self-compassion instead….