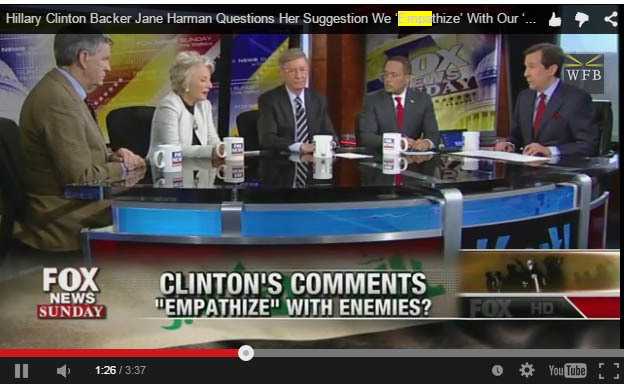 Washington Post columnist George Will said Clinton’s “gaseous new-age rhetoric about respect and empathy” was a poor attempt at explaining that the U.S. needs to understand its enemies in order to defeat them.

“Let me try to say this as politely as possible: The English language is not Hillary Clinton’s close friend. She’s just not a fluent speaker,” Will said. “We’re going to have a lot of experience with this, we’ve had it already, we’ll have a lot more going forward.

Unfortunately in some of the wider follow-ups–such as the piece in the Chronicle of Higher Education, the idea of empathy as a key component seemed to drop out. Empathy is crucial, not just for teaching, but for anthropological inquiry.   A…

Compassion is a response to suffering—our own, and to the pain of others. The word comes from the Latin meaning to co-suffer. Compassion is noticing pain, feeling it with another person, and then responding to it n some way. What an exciting…

This scenario is also familiar to much of the medical community. In fact, the highly respected Massachusetts General Hospital has launched a training program engineered to teach doctors empathy. This is not a program designed to simply improve “b…

Marc Brackett never liked school. “I was always bored,” he says, “and I never felt like any of my teachers really cared. I can’t think of anybody that made me feel inspired.”…   At a time of contentious debate over …