Home » News » Henry F. De Sio, Jr., Addresses International Symposium on “Why Empathy Is As Important as Reading and Math” 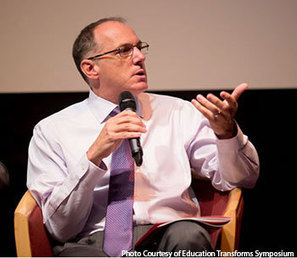 Henry was introduced to this distinguished group as a “prominent advocate of empathy in transformational change.”

His address, entitled “New Literacy and the Changemaker Generation: Why Empathy Is As Important as Reading and Math” discusses how the “changemaker effect” is accelerating the transition to a world characterized by rapid change, which is the polar opposite of the world of repetition that society has long known.

He notes that social entrepreneurs are uniquely positioned to help facilitate societal understanding of the learning needs of young people where changemaking is the norm.  In this rapidly changing world it is essential that every child master empathy and teens must have the requisite skills of cognitive empathy based ethics, work in teams of teams, (a different kind of teamwork), new leadership and changemaking.

NEW LITERACY AND THE CHANGEMAKER GENERATION

Why Empathy is as Important as Reading and Math

Ashoka: Innovators for the Public

Researchers have been working on a brand new study based on prairie voles actually consoling their loved one who are feeling stressed, and based on the results of this study, it appears that the infamous “love hormone,” called oxytocin, is …

‘The mission of the Empathy Factory is to instil a sense of empathy and a philanthropic spirit in Nova Scotia’s youth. To build a generation of generous, conscientious humanitarians. To empower children to effect the world and be socially conscio…