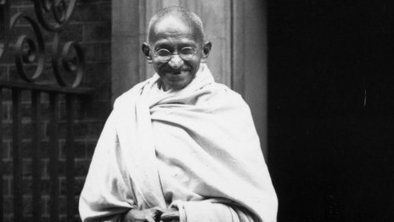 A statue of the Indian political leader Mahatma Gandhi is to be erected opposite the Houses of Parliament.

The memorial will stand in Parliament Square alongside those of Abraham Lincoln and Nelson Mandela.

Speaking on a trip to the Gandhi memorial in Delhi, Foreign Secretary William Hague said the statue would be a “fitting tribute” to a “great man”.

Gandhi studied in London for many years before leading non-violent resistance to British rule in India.

He was assassinated in January 1948, months after India secured independence.

The sculptor Philip Jackson, whose works include statues of the Queen Mother and RAF Bomber Command, has been approached to take on the project – which will be paid for by charitable donations and sponsors.

It is intended that the statue will be completed early next year and become a focal point for future commemorations, including the 70-year anniversary of Gandhi’s death in 2018.

“Gandhi’s view of communal peace and resistance to division, his desire to drive India forward and his commitment to non-violence left a legacy that is as relevant today as it was during his life,” he said.

An advisory panel is to be set up to spearhead the project. Its members will include prominent members of the Indian community in London, such as Lord Bilimoria, as well as National Portrait Gallery director Sandy Nairne.

Culture Secretary Sajid Javid, who will chair the panel and whose parents were born in India, said the statue would celebrate Gandhi’s “reverence and greatness”.

“No matter what your background, history, or religion, this statue will allow people from around the world to look upon him and appreciate his endeavour and successes for humanity.”

The statue will be the 11th to be erected in Parliament Square. Others public figures memorialised include former Prime Ministers Winston Churchill, Benjamin Disraeli and Robert Peel.

The Institute for Economics and Peace provides a new methodology to categorize and account for the economic activity related to violence.   The size of economic activity that is devoted to inflicting, preventing or dealing with the consequences o…

In my workshops and writings I have consistently emphasized the importance of empathy as an essential skill for enriching our lives. In books I have co-authored with my close friend and colleague Dr. Sam Goldstein, such as Raising Resilient Children an…

March 20, 2013, marks the first ever International Day of Happiness. This was decreed last year by the United Nations following a meeting on well-being attended by government officials, economists, scholars, and business and spiritual leaders from arou…

On my way to Washington, D.C. from New York City the other day, I (Sara) stepped onto an escalator just after an older man who was probably in his seventies. As we rode down the escalator, his bag got stuck in the tracks, and he took a tumble. With now…