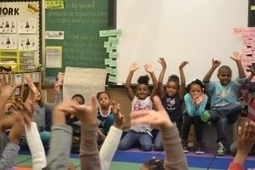 On my way to Washington, D.C. from New York City the other day, I (Sara) stepped onto an escalator just after an older man who was probably in his seventies. As we rode down the escalator, his bag got stuck in the tracks, and he took a tumble. With nowhere to go, I took a fall forward too – right on top of him. Busy New Yorkers, anxious to get to Washington, began to push me, further smushing my body on top of the old man’s. “Let’s go!” they yelled. Not one person stopped to help the older man. Not one person asked if we were okay. All anyone could think about was getting to their train car first.

After reaching down to help the old man stand, I hobbled to my train, bleeding, and sent an email to those friends and colleagues I knew would get it:

Bill Drayton, the C.E.O. and Founder of Ashoka, sees empathy as fundamental to creating a world of changemakers – where citizens lead the solutions our society needs. According to Drayton, our challenging world requires a whole new set of skills: people “must master empathy, teamwork, the new leadership, and changemaking first. Only then will they be able to put their knowledge to work. The most important of these skills is empathy. It is the foundation for everything else. ”

If, as Drayton says, empathy is a skill that must be learned, why not bring empathy to the classroom?

Mary Gordon is an Ashoka Fellow whose organization, Roots of Empathy, seized upon a unique insight: babies promote a caring response in human beings. By bringing a baby into an elementary school classroom over the course of a year and allowing students to identify and reflect on the baby’s emotions, as well as their own, Gordon was able to reduce students’ aggression and increase empathy. This observation was transformational. It meant that programs like Roots of Empathy could produce measurable change in social and emotional competencies – skills critical for success in the 21st century.

Over the past two years, Ashoka has focused on finding and celebrating schools that are making empathy a priority. From Mission Hill School, a Boston public pilot school documenting their approach to learning in a 10-part documentary, “A Year at Mission Hill,” to the Inspired Teaching School in Washington, D.C., these “Changemaker Schools” demonstrate a groundswell of hard work and innovation that is graduating a more empathetic generation of future leaders.

In a recent Start Empathy article, principal Aimee Miner at Lake Forest Park Elementary in Seattle remarked that being labeled a Changemaker School was a transformative and reaffirming moment for the staff: “It helps us to identify the good work we are doing and what else we can do moving forward,” Miner shared.

Indeed, there is much to be learned in the recognition of all that has been accomplished.

Our organization, Move This World, has taken on the challenge to “start empathy” through a holistic approach that engages administrators, educators, families, and students. Move This World started as part of a Fulbright Scholarship in Bogota, Colombia, in 2007, and since has grown into a global nonprofit that uses creative movement as a vehicle to prevent violence and bullying in communities. Working with more than 79 schools and community centers and 8,000 individuals here in the United States, we’ve learned some of the key principles behind what it takes to change your school into a safe and positive environment, where skills including changemaking can be fostered:

New research is showing us how kids learn better, and evidence now supports several models of social and emotional learning in schools. As featured on a recent episode of This American Life, writer Paul Tough and Nobel prize-winning economist James Heckman are challenging the notion that cognitive skills – those that form the basis of standardized tests – can be indicative of success later in life.  Rather, a study conducted by Heckman between GED students and high school graduates found that it wasn’t the test scores, but rather the “soft skills,” often not measured, that mattered most. This data, when harnessed, can be used to develop better programs and policies in any school.

Altavia Ray, a Move This World partner from The Literacy Lab atSmothers Elementary in Washington, D.C., has long been a leader and supporter of the movement to bring changemaking skills to local students. She works with the Literacy Lab — a ground-breaking tutoring program focused on bringing in language skills through a mixed-media focus on poetry, storytelling, comics, and literature — and has been a champion of Move This World since the start. Ms. Ray notes that MTW “has been effective in filling some gaps in teaching social/emotional skills especially for students struggling with expressive language skills,” and has “reinforce[d] the strategies and techniques daily to assist students in mitigating situations more effectively” — changes that would not have been brought about without her leadership.

Vicki Lichter, an educator at Baltimore Liberation Diploma Plus High School, describes that MTW’s work with a particular group of at-risk girls identified as having anger issues, ongoing conflicts with peers, and various other negative behaviors has enabled these students to focus better and resolve conflict without violence. One student shared with her teacher that she applied MTW strategies in a huge conflict she was having, and it totally de-escalated the situation.

Empathy has been proven to help students succeed inside and outside the classroom — whether looking at kids in the Bronx or students experiencing violence in their community in Colombia. Our responsibility as leaders of this change is to take the idea and run with it. We envision a day when Changemaker Schools are eventually just called “schools;” the same way that social entrepreneurs will, one day, just be labeled entrepreneurs. David Foster Wallace, in his “This is Water” commencement speech recently popularized on the Internet, perhaps put it best: “The really important kind of freedom involves attention, and awareness, and discipline, and effort, and being able truly to care about other people and to sacrifice for them, over and over, in myriad petty little unsexy ways, every day.”

That’s empathy. And, like he says, “the most obvious, ubiquitous, important realities are often the ones that are hardest to see and talk about.”

Learning empathy is our life’s work, but practicing it takes just a second; for example, the time it takes to ask someone when they’ve fallen down, “Are you okay?”

What’s important is self-compassion…   If you look under the Self-Help heading on Amazon, you’ll find roughly 5,000 books listed under the subhead Self-Esteem. The vast majority of these books aim to not only tell you why your self-esteem might…

Jim Manske’s insight:Glad to be heading home after a successful hernia repair. We get back to Maui tomorrow.See it on Scoop.it, via Radical Compassion

What lies behind the ‘spontaneity’ of laughter?   Plato and Aristotle saw it as a tool to topple the mighty. It often accompanies gruesome acts of cruelty. Most of us will use it more routinely – to win friendship and love. So what lies beh…