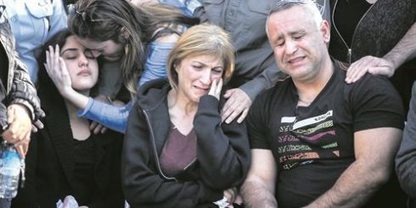 For nearly 70 years, politicians, diplomats, grassroots activists and militants have tried and failed to resolve the Israel-Palestine crisis.

Perhaps scientists should be given a chance – although they might want to work on the titles of their conferences:
“Empathy Neuroscience: Translational Relevance for Conflict Resolution” was held this week at the British Academy in London.

The gathering, the brainchild of Cambridge professor Simon Baron-Cohen, was about stripping down the conflict between Israelis and Palestinians to the cellular level. Literally.
Attendees shared findings about the specific areas of the brain that respond empathically and the chemicals they secrete. The hope was that the science might provide some insights into creating what is still lacking between the two peoples: an empathic understanding of the “other” side that would allow for a lasting peace settlement.

Donald Trump owns the fatal political and business flaw. Trump has a big problem. In his 2016 run for Presidency, Trump daily flashes his grand flaw, the one that will keep him out of the White House: a lack of empathy.He is incapable of jump…

Empathy versus SympathySee it on Scoop.it, via Empathy and Compassion

Empathy is a controversial subject in the field of Asperger Syndrome/neurotypical relationships. The theory of mind postulates that people with Asperger Syndrome have some degree of mind blindness, or an inability to fathom the motivations and feelings…

“I notice that people are intrigued by the notion of nonviolence but do not want to seem weak.Empathy is another subject that seems to be more easily embraced by women. Is empathy actually ‘tough?” How can we talk to men or people who don’t want to be …