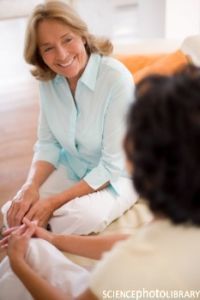 A new study shows that our own feelings may hamper our ability to feel empathy. And if we have to make sudden decisions, empathy is even further restricted.

Up until now, researchers have hypothesized that we mainly draw on our own emotions as a reference for empathy. This only works, however, if we are in a neutral state or the same state as our counterpart — otherwise, the brain must counteract and correct.

A research team headed by Tania Singer from the Max Planck Institute for Human Cognitive and Brain Sciences conducted a complex battery of experiments and tests. They identified the area of the brain responsible for helping us distinguish our own emotional state from that of other people — the supramarginal gyrus .

“This was unexpected, as we had the temporo-parietal junction in our sights. This is located more towards the front of the brain,” said Claus Lamm, one of the publication’s authors.

For the study, participants worked in teams of two and were exposed to either pleasant or unpleasant simultaneous visual and tactile stimuli.   Using a perception experiment, the researchers showed that our own feelings actually do influence our capacity for empathy, and that this egocentricity can be measured.

“It was important to combine the two stimuli. Without the tactile stimulus, the participants would only have evaluated the situation ‘with their heads’ and their feelings would have been excluded,” said Lamm. The participants could also see the stimulus that their team partners were exposed to as well.

Next, the two subjects were asked to evaluate either their own emotions or those of their partners.

When both participants were exposed to the same type of positive or negative stimuli, they found it easy to guess the other’s emotions. For example, the participant who had to interact with a stinkbug could easily imagine how unpleasant the sight and feeling of a spider must be for her partner.

Differences only appeared when one partner was confronted with pleasant stimuli and the other with unpleasant stimuli. In this case, their capacity for empathy suddenly plummeted.

With the help of functional magnetic resonance imaging, the researchers pinpointed the area of the brain responsible for this phenomenon — the right supramarginal gyrus.  This region ensures that we can separate our perception of ourselves from that of others.

When the neurons in this region were disrupted in the course of this task, however, the subjects found it difficult not to project their own feelings onto others.

The volunteers’ assessments were also less accurate when they were forced to make particularly quick decisions.

If this burgeoning field of peacebuilding is to reach full potential, we must help catalyze and galvanize a movement behind it and create much stronger systems and infrastructure to support it….See it on Scoop.it, via Radical Compassion

What’s important is self-compassion…   If you look under the Self-Help heading on Amazon, you’ll find roughly 5,000 books listed under the subhead Self-Esteem. The vast majority of these books aim to not only tell you why your self-esteem might…

Mounting evidence of the impact of contemplative practices like meditation (which we now know can, quite literally,rewire the brain) are finally bringing modern science up to speed with ancient wisdom. Mindfulness and compassion — the practices o…