Home » News » Empathy Museum: A drag queen’s heels and a miner’s boots: show lets you walk a mile in their shoes 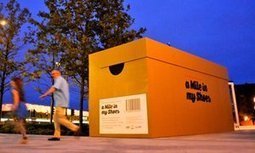 In the latest part of her ‘empathy museum’, Clare Patey invites audiences to put on a stranger’s footwear and take a walk while listening to the shoe-owner’s personal story on headphones

In 2013, Barack Obama gave a speech arguing that the “empathy deficit” in American life was just as urgent an issue as the federal deficit. Patey agrees that empathy is lacking – and that it can be transformative…

The idea for an “empathy museum” was dreamed up by Roman Krznaric, author of Empathy: Why It Matters, and How to Get It. He approached Patey with the idea after experiencing some of her pop-up museums that have included the Museum of Me, in which visitors were invited to curate mini museums of themselves in tin cans (there were 35,000 of these mini time capsules, now all archived), and the Museum of Emotions which, unlike traditional museums that value objects, valued feelings and created spaces that evoked them and where they could be expressed.

Unlike many innate skills, perspective taking is not something children are born with. It usually begins to develop around age 1 and is a skill that continues to develop over time into adulthood. It is another “social skill” that is imperat…

It’s no secret that I spend a lot of time thinking about, practicing, and spreading empathy. Jeremy Rifkin’s The Empathic Civilization anchored my praxis with the thesis: Preserving humanity and the biosphere require empathy.According to Rifkin, this i…

There is an example of antichrist empathy in the Bible.See it on Scoop.it, via Empathy and Compassion

Empathy. It’s not something you’ll find taught in schools or practiced in politics, business or the courts, yet it is an essential component to life. Empathy is so fundamental to human development that people without it can be classified as…