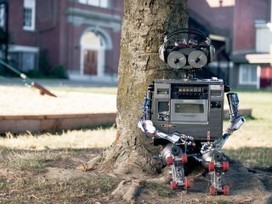 Robots may not have the capacity to care about us  yet, but that won’t stop humans from feeling unrequited love for their android buddies. While it may seem obvious to those of us who have harbored a mad Data crush at one point or another, a new study seems to confirm that humans harbor a great deal of empathy for their robotic brethren, reacting to affection towards — or violence against — them in the same way they react to these things in humans.

The paper, scheduled to be presented this summer at the 63rd Annual International Communication Association Conference, combines the results of two small studies. In one, participants were shown video of a small, dinosaur-inspired robot being either shown affection or abused, and given a survey about their emotional frame of mind immediately afterwards. In the next, participants were monitored with an fMRI machine that took stock of their brain activity while watching videos of humans, robots, and inanimate objects being treated affectionately, as well as abused.

A Techwise Conversation with Paul Zak, author of The Moral Molecule…   The substance is oxytocin, and my guest is Paul Zak. He’s a professor of economics, management, and psychology—a combination we’ll be asking him about in a…

By Kyle SmithThere is always inequity in life,” an American president declared. ”Life is unfair.”The president was John F. Kennedy, speaking in 1962.Today it’s hard to picture even a losing Republican nominee for president …

Our relationship with technology is always fraught. Each new social media platform gives us more ways to connect with people we know–and people we don’t–from all over the world. But each new development also provokes fear of increasing isolatio…