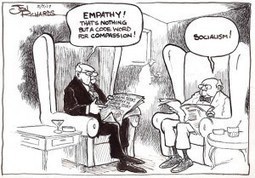 Given the importance of empathy to my political worldview, I was surprised to read in a recent New Yorker magazine an essay by Paul Bloom presenting a “case against empathy” as providing a faulty basis for motivating progressive policy outcomes. According to Mr. Bloom:

Empathy has some unfortunate features—it is parochial, narrow-minded, and innumerate. We’re often at our best when we’re smart enough not to rely on it.

This critique appears to be based on two fundamental concerns with empathy.

First, Mr. Bloom contends that empathy does not provide a good guide to policy for progressives because both sides can urge empathy for the individuals who are benefited or harmed by a proposed policy as a reason to support or defeat such policy.

Second, empathy is typically triggered by the “identifiable victim effect,” which gets us focused on a small number of people who were impacted by a particular circumstance like a natural disaster or a murder, rather than on the fact that vast numbers of people throughout the world are suffering far worse fates with little to no attention paid by the rest of us.

by MARK WILSONIn front of us sits Ideo’s first stab at a solution called the Creative Listening Toolkit, a vibrant collection of paper pamphlets that have been illustrated with a Sharpie.Each is labeled with words like Intuition, Interpretation, …

A lack of empathy poses dangers on all levels great and small. Social scientists are particularly concerned about an increasing lack of empathy in America. Citing tests like theNarcissistic Personality Inventory (NPI), Psychology Today r…

Design thinking is a concept that centers around applying creativity and innovation to our actions, decision making, and problem solving as human beings. More significantly, it focuses on the impact that this creative and innovative thinking has on ind…

We empower children to take action and make to the world a better place. Our leadership inspires and challenges youth to tap into their empathy and create social change. Children are often ‘accused’ of having unabashed optimism, but th…