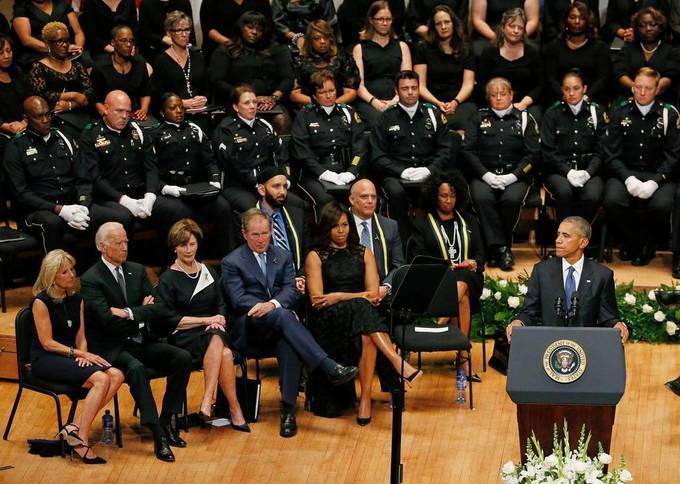 In a way few can do, Obama called the country together to reach across the gaping divide that was exposed this week. He summed up the divided understanding many Blacks and whites have about policing and police violence. He suggested reality is more complex than the simple rhetoric we hear in the media and encourage all sides to empathize with the other.

“Because with an open heart,” said Obama, “we can learn to stand in each other’s shoes and look at the world through each other’s eyes, so that maybe the police officer sees his own son in that teenager with a hoodie who’s kind of goofing off but not dangerous and the teenager – maybe the teenager will see in the police officer the same words and values and authority of his parents.”

Of course empathy is important and we should encourage it. But the president falls short; empathy alone will never end the regular and widespread killing of black people in disproportionate numbers.

It’s a racist system, not a few individual racist police that devalues black lives and leaves us dead so easily.

High levels of anxiety a week after a kidney transplant patient went home more than doubled the chances he or she would be readmitted within 30 days of release, researchers found. And anxiety was higher for patients who received inconsistent direc…

An Atheist announced on an internet discussion board, “Atheists are good without God!” It was not the first time I had heard it. Over the past twelve years, on the many atheist forums I had visited, the atheists and even some professing &ld…

By Jenn SmithThe mural project, which will be unveiled on Saturday, Jan. 30, as part of Mass MoCA’s annual “Free Day,” hangs in the “Walk in My Shoes” exhibition.The show represents the first year of a four-year federally funded arts education initiati…