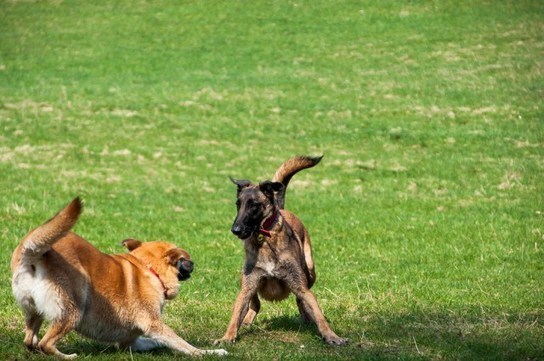 When one person yawns, its not uncommon for someone else to follow suit. The same goes for laughing or smiling. This involuntary mimicry of another person is known as “emotional contagion,” and is thought to be evidence for a basic form of empathy, as one person is able to experience what another is feeling.

Now, it seems, dogsmay do this too as they have been found to involuntarily mimic other dogs while playing. The researchers claim that this gives further proof that dogs are very likely empathetic.

We know that dogs can and do mimic their owners, as shown when canines catch their human’s yawn. But the new research, published in Royal Society Open Science, has found that dogs do the same with other dogs in what the scientists think is an attempt at bonding.

We have an empathy crisis in this country. Our fierce sense of independence and entitlement allows us to effectively shut off suffering for anyone but “our own.” We ALL know tragedy, hurt, struggle; we have all, at one point or another, col…

About Empathetic Marketing:In today’s competitive and global marketplace it is  becoming increasingly essential for companies and brands to understand why customers buy—or don’t buy—their products and services. Only by…

Empathy is about standing in someone else’s shoes, feeling with his or her heart, seeing with his or her eyes. Not only is empathy hard to outsource and automate, but it makes the world a better place.” —Daniel H. PinkEmpathy may…

Profiles in Empathy Ecological Empathy Kinesthetic Empathy   For me, one of the greatest challenges of the 21st century is to make people more visible to one another, to find ways for people to engage, empathize, and learn of each o…