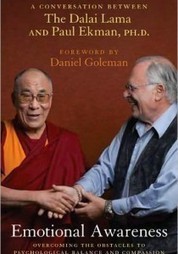 Over the last decade, Paul Ekman has had the opportunity to spend close to 50 hours in one-on-one conversations with the Dalai Lama. The content from their first dialogue was published in the book Emotional Awareness (2008).

During their most recent meeting in New Delhi, India, (January 2012)  they spent another 6 hours discussing compassion; this exchange was recorded and segmented into many different webisodes for our series called Developing Global Compassion. We will release and archive a new webisode every 2 weeks beginning June 9th through December 2014.

You can read part of the transcribed conversation and discover how the Dalai Lama responded to Ekman’s thinking in the last chapter of  his new book Moving Toward Global Compassion.

In his “The Antiquity Of Empathy” Perspective article in the May 18 issue of Science, Frans de Waal, PhD, Director of the Living Links Center at the Yerkes National Primate Research Center, Emory University, writes animal empathy is best re…

Mattersight’s system, on the other hand, is more like “artificial empathy”: it takes the same stream of verbal input, and it extracts information about the speakers mood, personality, and interaction style. This is basically the same …

At its simplest, empathy is the awareness of the feelings and emotions of other people. It goes beyond sympathy, which is often thought of as feeling for someone, and instead, is feeling with that person. When we are empathetic toward someone else…

A study examining racial disparities reveals that people are more empathic to whites than blacks, especially when it comes to medical treatment for pain. How do we close this gap if most fail to realize that it exist?See it on Scoop.it, via Empathy and…