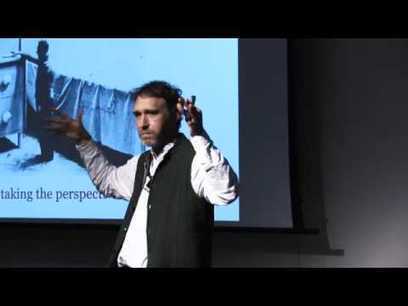 ‘Empathy and the Revolution of Human Relationships‘ – a public talk by cultural thinker and writer on the art of living and social change, Roman Krznaric.

Roman Krznaric’s writings on empathy have been widely influential amongst political and ecological campaigners, education reformers, social entrepreneurs, and designers. His books include: Empathy (2014), How to Find Fulfilling Work (2013) and The Wonderbox (2011). He is founder of the world’s first Empathy Museum and of the digital Empathy Library as well as a founding faculty member of The School of Life and on the faculty of Year Here.
www.romankrznaric.com

For biologist Frans de Waal, a peaceful species of great ape in Africa is a mirror of humanity and a living argument that empathy and cooperation are far from unique to mankind.”The Bonobo and the Atheist: In Search of Humanism among the Primates…

Feeling cold just by watching someone else shiver. Physiological response to seeing another person who is cold.A recent study showed that people’s body temperature actually dropped when they saw images of an actor dipping their hand into ice cold water…

Q: What difference has it made in your life?Lazar: I’ve been doing this for 20 years now, so it’s had a very profound influence on my life. It’s very grounding. It’s reduced stress. It helps me think more clearly. It’s gre…