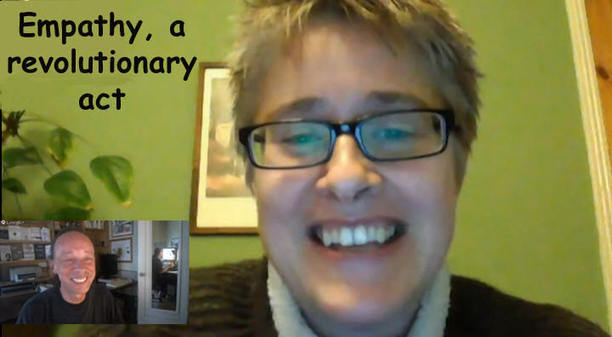 Sandy Hope is a counsellor working with adults and young people in UK. Sandy works from a Carl Rogers Person-Centred perspective and holds workshops on Domestic Violence and Abuse, Difference and Privilege, as well as, Anger Awareness. Sandy wrote the article Empathy – a revolutionary act and says,  “If we want a radical feminist revolution that overturns our current ways of thinking and responding to the world, I believe, and I’m not alone, that this begins (and ends) with empathy.

The style of thinking that characterises patriarchy/kyriarchy is individualistic, self-orientated, and based on competition, control and domination. It comes from a false belief that these are the natural drivers of human nature, a belief that is unfortunately self-reinforcing…  When I started my Facebook page, Lesbians and Feminists Against Transphobia my purpose was to build empathy between feminist, lesbian and trans* communities. Although this was intended to be a reciprocal process, and the empathy needs to be two-way, I was motivated by the institutional transphobia I had encountered within lesbian and feminist circles towards trans* people, a phenomenon entirely based in lack of empathy.  This mattered to me because I witnessed the social exclusion of trans* people as having a profoundly detrimental effect on their psychological wellbeing“

Trump’s Islamophobic comments aside, the important part of this narrative was Khizr Khan’s passionate assertion that the Republican nominee was devoid of empathy: empathy for veterans, empathy for the families of troops killed in combat, an…