Home » News » Circles of Empathy: Why We Care About People To Different Degrees 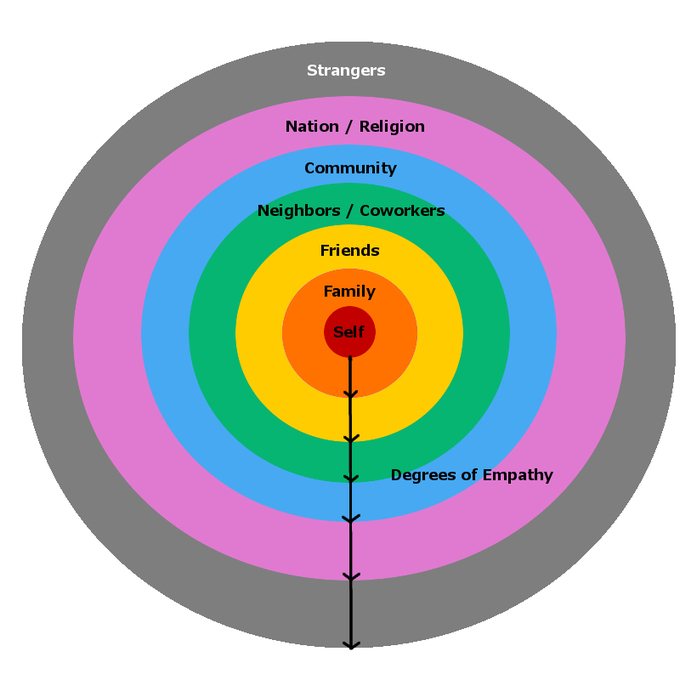 We don’t often think about it this way, but empathy is a limited resource. Our “circles of empathy” show us who we tend to invest this resource in the most.

Naturally you can empathize with anyone if given the chance. Anyone can theoretically become a friend.

Of course it helps if you have met the person. Or at the very least, you can attach an identity to them like a name or a face. Psychologists sometimes call this the “identifiable victim effect.”

Basically, it’s far easier to empathize with people who we can personally identify (with at least a name or a face), rather than if they are some abstraction (like a number or a statistic).

Think about it this way: When you hear about 100 strangers dying from some other part of the world vs. 1000 strangers dying, your empathetic response doesn’t usually become 10x more intense, even though there are 10x as many deaths.

Empathy research divides the phenomenon into three empathic subtypes: emotional, cognitive, and motivational. The idea is that when you see someone else experiencing emotion, you respond in one of three ways: You catch their emotional state yourse…

“Empathy is also something we are taught to “get over” or grow out of. We learn to quash our caring reactions for others, and our busy lives and immediate preoccupations provide excuses for not developing empathy.” Lori Gruen is Pro…

This story today about the rich man and Lazarus demonstrates the problem with a lack of empathy. The comedian Louis CK also spoke recently about our inability to empathize. In a television interview, he said that children should not hav…

This Dev Bootcamp program aims to make the tech industry a friendlier place for women and minorities.Engineering Empathy strives to give coders of all genders the knowledge and emotional skills to cultivate inclusive work environments. The program cons…