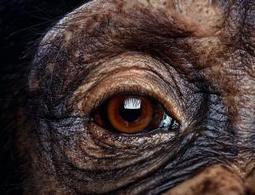 Chimpanzees and humans may share the same ability to empathise with other individuals by involuntarily matching their pupil size.

The mimicry only appears to work between two humans or between two chimpanzees but not between species, suggesting the signalling reinforces social bonds within species.

We already know that pupils change shape in response to a new, unfamiliar target: they tend to constrict initially and, after a fraction of a second, readjust and dilate. There’s evidence that human pupils dilate more rapidly while adjusting if their owner is interacting with another human whose pupils are also dilating. The dilation-adjustment happens more slowly if the other human’s pupils are constricting. But it is unclear when this pupil mimicry began in evolutionary terms.

To investigate, Mariska Kret at th

New York Times columnist David Brooks has been pulling no punches when it comes to criticizing Donald Trump.  In his latest column he plays the Khizr Khan card by chiding the GOP POTUS nominee for his lack of empathy.  This, of course, is a c…

What are your subtle biases? Everybody has them, but we have a hard time acknowledging and coming to terms with them. Jennifer Perry takes on a neurological perspective to discuss the importance of accepting our subtle biases and using our motivated em…

Devyn Hebert ’17, Gideon Hess ’16 and Claire Bergey ’17 acted in the play, which posed questions about our capacity for empathy. Ideally, empathy allows us to attach meaning to others’ experiences, but the play provokes cer…

Pilot program is testing the broader benefits of animal care classes   For children who have witnessed the mistreatment of animals – and sometimes people – classes with fluffy, mellow Bella [dog] are teaching kindness, patience and an emphasis on …