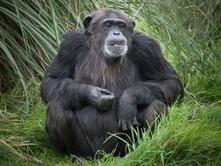 Whether animals have the ability to show empathy similar to humans has been the subject for debate for many years. Matthew Campbell and Frans de Waal, who work at Yerkes National Primate Research Center, set about to test this under controlled conditions.

Research undertaken by the two found that chimpanzees can empathise with humans, even if the human is unfamiliar to them. The team explain, “Chimpanzees showed that the ability to connect with unfamiliar individuals is not unique to humans.” However, the chimpanzees did not empathise with baboons, a species that was unknown to the chimps in the experiment.

Contagious yawning was key in the study,
as with this mimicked action the team were
able to measure how empathetic the
chimps were – the more yawns,
the greater the level of empathy.

Teachers are uniquely positioned to teach empathy, which will help children not only discover personal success, but also contribute to the betterment of society…Empathy is systemically related to all of the abilities on the compass, particularly to s…

From elementary through high school, research demonstrates a relationship between empathic abilities and effective teaching. When teachers are more empathic, the positive outcomes are significant: Improved academic effort, achievement, motivation, self…

Do children become more kind and empathetic after a disaster— or does the experience make them more focus more on self-preservation? The first study to examine the question in an experimental way shows that children’s reactions may dep…