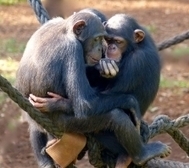 New research from Lund University, Sweden, has shown for the first time that chimpanzees catch yawns from humans, and that the susceptibility to contagious yawning develops gradually with age – just like it does in humans…

Yawning together is not just a sign of being tired at the same time. Previous research, on adult humans, chimpanzees, bonobos, baboons and dogs, has suggested that contagious yawning may be used as a measure of empathy, that is, the ability to feel or imagine others’ emotional experiences. One argument for this is that we tend to be more susceptible to catching yawns from those we are close to.

As a way of examining the role that empathy with the yawner played for contagion, the study also compared the chimpanzees’ reactions towards yawns from their human surrogate mother and a stranger. Contrary to prediction, there was no difference in the likelihood of yawning when engaging with an unfamiliar person from someone with whom the chimpanzees had a close relationship.

In “UnSelfie: Why Empathetic Kids Succeed in Our All-About-Me World,” her 23rd book, Dr. Borba combines scientific research with tales from real-world families and offers concrete tips on how to cultivate kindness.We talked recently about &…

“The idea is that you are looking at a mirror, but the mirror is really a screen or TV that just looks like a mirror,” Korgel said. “You’d basically be looking at your image, a reflection of you, and that reflection will say thi…

We can threatened by another person’s stress, says Rick Hanson. So how do you stay open, caring, and brave enough to help them?Humans are an empathic, compassionate, and loving species, so it is natural to feel sad, worried, or fiery about the tro…

Neuroscience suggests that the classic dramatic arc can change our brains and spur us to action. Kirby Ferguson, Paul Zak6 MINUTESSee it on Scoop.it, via Empathy and Compassion