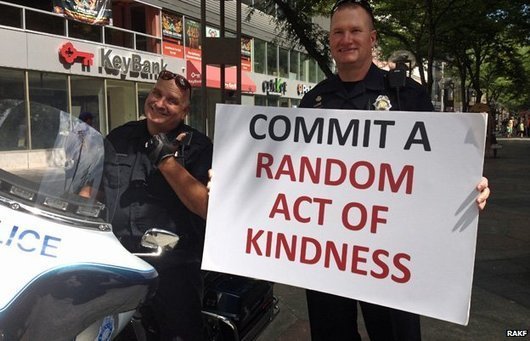 Picking up litter. Buying someone in need a coffee. Or just doling out free hugs. There’s a growing movement of people doing nice things for strangers, but do they make for a kinder society?

Each week, Elisa Ng trawls the streets of Singapore picking up rubbish discarded by her fellow citizens. She is not searching for treasure hidden in the litter. Her only goal is to leave the city a little cleaner than before.

“I want to encourage other people to pick up a piece of litter every day,” she says.

Recently, she chased an errant lorry driver who had thrown a plastic bag from his window. “He looked quite apprehensive and seemed apologetic,” she says.

Thankless though the task seems, Ng is just one of many residents of the city who have been inspired by the Singapore Kindness Movement, a government-funded body which aims to promote helpful and courteous behaviour amongst its people.

“It definitely makes a difference,” says William Wan, the leader of the movement. “We have changed the way that certain social norms are accepted. People are starting to give up their seats on buses now, which they never used to do.”

A similar organisation, the Random Acts of Kindness Foundation, was founded in Denver, Colorado, in response to the city’s “Summer of Violence” in 1993, when dozens of people were killed in gang-related shootings, including several children. One victim of stray gunfire was just 10 months old.

The organisation borrowed the writer Ann Herbert’s call for people to “practice random acts of kindness, and senseless acts of beauty”.

The phrase has since been popularised on doormats and bumper stickers across the US and encourages Americans to surprise one another with good deeds.

Kelsey Gryniewicz, a director at the foundation, advocates activities such as anonymously leaving hampers of food on neighbours’ doorsteps and paying for the person queuing behind you at a coffee shop.

“It’s not just about single acts, though,” she says. “It’s about changing your mentality from day to day.”

The World Kindness Movement represents the work of organisations from 23 different countries. “It has gone way past the level of community endeavour,” says its secretary general Michael Lloyd-White.

Each year, the Charities Aid Foundation (CAF) publishes a World Giving Index, which attempts to track certain types of giving behaviour in 146 countries across the globe.

The data is extracted from an annual poll conducted by research firm Gallup and ranks countries according to the proportion of people who have volunteered, helped strangers at random, or donated money to charity in a typical month.

In first position last year was Australia, where a third of the population volunteers each month and two-thirds claim to have helped a stranger and donated money to charity.

Lisa Grinham, from CAF’s Australian branch, says that the rise is due to the flooding that hit Queensland and Victoria the year before, pointing out that figures tend to rise in times of national hardship.

Globally, however, the position is very different. “The trend that has been revealed is a disturbing one,” says Dr John Law, the chief executive of the Charities Aid Foundation. The number of acts of kindness and charity dropped by hundreds of millions last year due to the global recession, he says.

Children at a school kindness assembly

William Wan of the Singapore Kindness Movement blames the decline on “bread-and-butter issues” such as the rising cost of housing and transport.

In the US, which dropped from first to fifth place in the global index last year, a team of academics is working on a programme of compassion education in schools to try to reverse the decline.

Richard J Davidson from the Center for Investigating Healthy Minds at the University of Wisconsin-Madison thinks that the level of kindness in society can be improved if children are taught to be more empathetic from an early age.

“Compassion should be regarded as a skill that can be cultivated through training,” he says.

The kindness curriculum is currently being taught in 10 schools across Wisconsin. The project is still at the research stage, but “the early signs are promising”, he says.

Not everybody is convinced that focussing on compassion in this way is helpful, however.

“We have made altruism a sacred object, so we’ve been blinded to its deleterious effects,” says Barbara Oakley from the University of Oakland, Michigan.

In a new book called Pathological Altruism, she argues against what she sees as a cultural obsession with the notion of kindness.

“There’s a misguided view that empathy is a universal solvent. Helping others is often about your own narcissism. What you think people need is often not actually what they need.”

Kelsey Gryniewicz doesn’t think that the American kindness movement is guilty of that charge, arguing that there are tangible, practical benefits to the activities they recommend.

“It doesn’t have to be about cradling people in a bubble of kindness,” she says.

In Singapore, William Wan takes a more reflective view. “We must be realistic. We mustn’t be naive. Kindness movements can’t solve all our problems, but if they can solve some of our problems, why not use them?”

Jim Manske’s insight:
Its clear to me that in acts of compassionate giving and recieving, the boundary between giver and receiver collapses, leaving only Love.

Imagine that you woke up tomorrow morning to discover $1 million under your mattress. Leaving aside the obvious lumpiness issue, take a moment to think: What would you do with that cash?If you’re like many people, contemplating your newfound wealth wou…

Here are the facts you need to know: The World Health Organizations forecasts that stress will be the major cause of disability in the world by 2020;Science confirms that optimization of our intellectual potential, health and wellness start with primin…