Home » News » Can a cellphone reduce the amount of empathy we feel for each other? PBS NewsHour 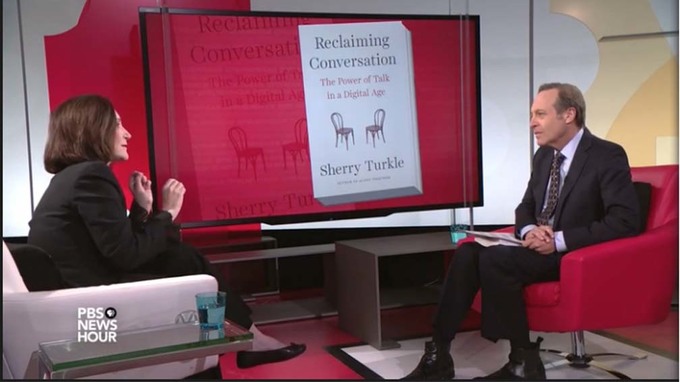 Can a cellphone reduce the amount of empathy we feel for each other? In her new book “Reclaiming Conversation,” author Sherry Turkle argues that technology is creating the illusion of togetherness, while reducing actual communication and connection.

She joins Jeffrey Brown to discuss her ideas for increasing interaction, both using in technology and without.

JEFFREY BROWN: But you see some — a very specific problem, a loss of empathy, of our ability to empathize with others. Explain that.

SHERRY TURKLE: Well, it’s very typical that when two people are having lunch, they put a phone on the table between them.

And all the research shows that the presence of that phone will do two things to the conversation. It will make the conversation go to trivial matters, and it will decrease the amount of empathy that the two people in the conversation feel toward each other. That phone is a signal that either of us can put our attention elsewhere

Narrative 4 (N4), an organization that aims to foster empathy through the power of storytelling, built emotional bonds in a powerful workshop on Nov. 5.The workshop, led by author and founder Colum McCann and executive director Lisa Consiglio, centered…

A new book argues that selflessness, not selfishness, creates more genetic success.But according to physicist and science writer Stefan Klein’s new book, the idea that we are born to be selfish is dead wrong. In Survival of the Nicest: How A…

Is empathy changing in a world where social media and globalization are rapidly transforming how we interact with others? The University of Victoria’s Rebeccah Nelems is investigating empathy and youth as part of a prestigious three-year scholars…

Colleen Clines share her personal journey to starting a social enterprise and using design thinking to impact the world.Colleen Clines at CreativeMornings Louisville, September 2015. Free events like this one are hosted every month in dozens of cities….