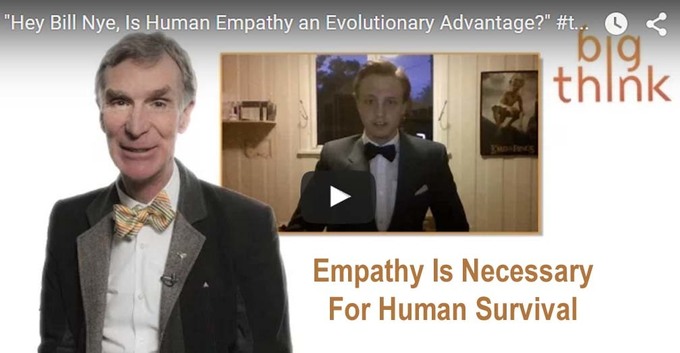 Bill Nye, beloved “Science Guy” and recent bowtie designer, says that being able to emotionally relate to another human being is an evolutionary advantage. It’s part of what has helped humans survive all this time. And according to Nye, its not just our bodies that evolve over time, but our emotions, too.

We often think of empathy as a kind of selflessness, but that doesn’t have to be the case.

Instead, it is often a self-awareness and self-focus that helps us feel for others. Watch Nye, who considers the issue “cool,” consider empathy and evolution in the Big Think video above. It may spark some deep questions of your own you’d want a guy like Nye to answe

When our keynote speaker, British author Karen Armstrong, says “Compassionate Cities are Uncomfortable Cities”, she means that compassion requires knowing the suffering of others. To be a compassionate community means that we will not rest …

Empathy — the ability to share someone else’s feelings — is perhaps the most important trait humans demonstrate. It’s not a purely human attribute — in fact, even rodents possess it — but humans are particularly good at it.It al…

One can well imagine that when the faithful see the results of this study, they will call it the work of the devil…   According to a new University of California-Berkeley study, the highly religious are less motivated to show generosity than are…

In this presentation from the GGSC’s “Practicing Mindfulness & Compassion” conference, therapist and health care manager Robert McClure explains how mindfulness meditation can help sustain compassion for health care workers.See it on Scoop.it, via …