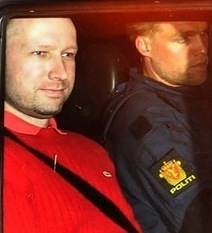 Baron-Cohen was interviewed in a Norwegian newspaper the week after the crime as he had just published the Norwegian translation of his book Zero Degrees of Empathy / The Science of Evil (the latter being the American title), which I reviewed here in June.

He diverges into a discussion on cognitive and affective empathy;

cognitive empathy (being able to discern others’ emotions and put yourself in their position) is impaired in autism,

while affective empathy (being affected emotionally by others’ suffering) is impaired or absent in what he calls antisocial personality disorder, a subset of which is psychopathy.

While not speculating on Breivik’s diagnosis, he writes that low affective empathy is necessary to bring about such an action, although it does not explain it entirely; his ideological convictions clearly played a part also.

The reason, Catala says, is that “empathy is too intense or too raw and can become a hindrance rather than a help.” He rebranded this feeling as something called “distant feel.”“Distant feel is a cool, detached, focused fo…

But partly it’s a failure of empathy. I really do mean empathy, not sympathy. Conservative elites are aware that poor people exist and genuinely want them to become wealthier. They are just completely failing to put themselves in the shoes of the…

A study by researchers at the University of Zurich indicates that empathy towards strangers can be learned and that positive experiences with others influence empathic brain responses.According to a recent Swiss study, we are all capable of feeling emp…