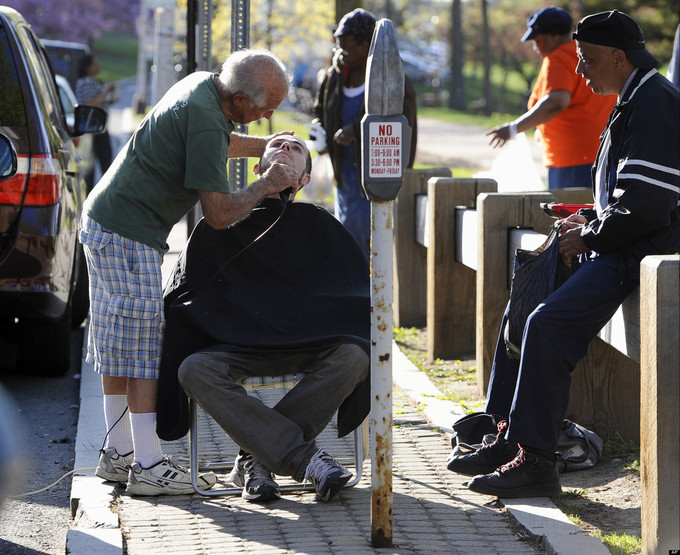 HARTFORD, Conn. — An 82-year-old barber who has been giving free haircuts to the homeless in exchange for hugs for 25 years was granted permission by the mayor Thursday to keep working in a city park, despite orders to leave from police and health officials.

Anthony “Joe the Barber” Cymerys has been a fixture every Wednesday for years at Bushnell Park, where he cuts hair and his friends hand out food to the needy.

But shortly after Cymerys set up shop this week, he said, health officials and police confronted him and his friends and told them they had to leave because they didn’t have permits.

“I thought it was a drug raid, honest to God,” Cymerys said. “It was the peanut gallery on TV where everyone was watching.”

City health officials said they ordered Cymerys out of the park Wednesday after unnamed local residents expressed concerns about the “safety and sanitation” of Cymerys’ free haircuts to homeless people and his friends’ food distribution. They also noted that Cymerys is not a licensed barber.

A spokeswoman for Mayor Pedro Segarra said later Thursday that he granted Cymerys a special dispensation in light of his years of charitable work. The spokeswoman, Maribel La Luz, said the city will help Cymerys obtain a state barber’s license if he likes.

Cymerys, who learned how to cut hair growing up and isn’t a licensed barber, said he wasn’t completely surprised by officials’ actions because they’ve asked him before to leave the park and other areas.

He said he always takes health precautions including soaking his trimmers in alcohol.

“Twenty-five years I’ve been giving haircuts, and no one died on me,” he said.

His friends questioned the city’s actions, saying officials kicked him out of the park only a year after honoring him for his humanitarian work.

“It’s kind of ironic that a year ago the mayor was giving him a citation for all the good work he’s been doing with the homeless there and they kick us out,” said George Pfuetzner, who gives out food at the park while Cymerys cuts hair.

Cymerys, of Windsor, began giving free haircuts to the homeless in the city around 1988, when he was volunteering at a shelter. He said he met a heroin addict named Arnold who needed a haircut, so he offered his services.

“I said, `Geez, Arnold. Not only are you a bum, you look like a bum. How about I bring in my clippers?'” Cymerys recalled.

Cymerys, a retired businessman, said his father cut his hair as a child, and he took it up.

“It’s all about inspiring people to do things for the least of our brothers,” he said.

Tal Ben-Shahar on Happiness at HarvardSee it on Scoop.it, via Radical Compassion

We are each made for goodness, love and compassion. Our lives are transformed as much as the world is when we live with these truths. Congratulations to Arianna Huffington and The Huffington Post for offering a new way to celebrate these truths with t…

Our brains are awash in a sea of hormones. Is it any wonder love still baffles us? But, here’s some news you can use: Don’t look for the perfect partner. Look for someone who wants to trade oxytocin.See it on Scoop.it, via Radical Compassion