Home » News » Are Women Too Empathetic to Be Engineers? 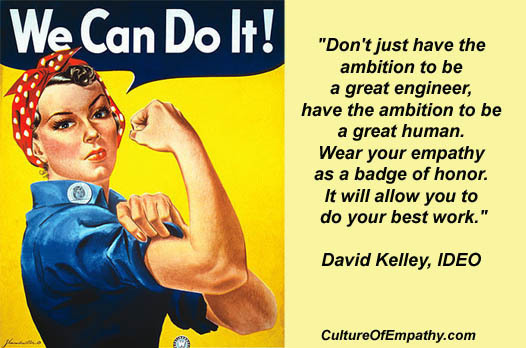 Engineers need to solve complicated technical problems and develop complex systems. Systemizing and logic seem like the main qualities we need in engineers. Won’t empathy just get in the way of objectivity?…

“Empathize.” That was David Kelley’s recent advice to 2014 engineering graduates from Dartmouth.

David is the founder and chairman of IDEO and the founder of Stanford’s d. school and he chose to talk about empathy with a group of engineers? Really? Maybe he didn’t understand his audience (so much for empathy)? Or did he?

Empathy is the ability to recognize emotions in others. Individuals range in their ability and desire to empathize and studies have found gender-based differences with regard to empathy. In general, men show greater systemizing behavior, while women show greater empathizing behavior. Systemizing behavior is the drive to analyze the variables in a system and to derive the underlying rules that govern a system’s behavior, whereas empathizing is the capacity to predict people’s behavior by inferring their mental states.

6 Habits of Highly Empathetic Nurses a Guest Post by Trisha C. Fronczek MS, RN-BC, CCRNWhat I gave all day was Empathy. Merriam-Webster defines empathy as “the feeling that you understand and share another person’s experiences and…

Reducing the stress of managing diabetes might even have biological effects that improve the condition, they add.This is the first randomized controlled trial of a self-compassion intervention among people with diabetes, lead author Anna Friis told Reu…

Empathy is the experience of understanding another person’s condition from their perspective. You place yourself in their shoes and feel what they are feeling. Empathy is known to increase prosocial (helping) behaviors. While American culture might be …

Julia Lennon is a passionate performer. Her love of music and theater has offered exciting opportunities for Julia throughout her life, and has, in many ways, defined who she is today. Julia leads both the women’s a Capella group and the improvisation…