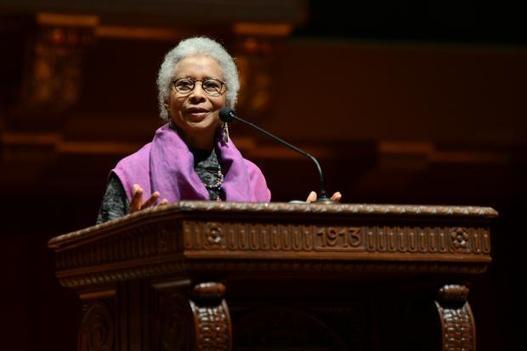 During the question and answer portion of the event, an audience member asked about Walker’s view of the conflict in Gaza, and Walker responded by again emphasizing the importance of friendship and empathy. She also compared the struggle of the Palestinians with that of African-American slaves, saying it is critical that the situation be resolved.

Another question posed to Walker was about how people achieve friendship and peace among others who murder and commit atrocities.

“I think it’s more about compassion, that they are such a mess, and what they’re missing in life,” Walker said. “I’m not eager to go to the prom with those men in that group in Nigeria, but

it has a lot to do with your own capacity to have empathy for people,”

she said in reference to an incident in April when terrorists from the Islamic extremist group Boko Haram kidnapped almost 300 young girls.

If you’re an empathetic person — good at connecting with other people’s feelings — can that help you win prestigious jobs that pay $100,000 a year or more? Or will you be stuck at the low end of the pay scale, doing a lot to promote rapport and smoot…

Tom and David Kelley of the award-winning Palo Alto-based global design firm IDEO have been helping private and public sector organizations innovate, grow and bring to market new ideas for 35 years… The notion of empathy and human-centeredness i…