Home » News » A Mile in Their Shoes: Understanding Empathy 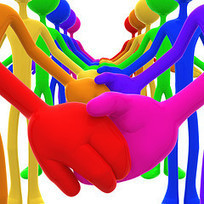 Empathy is a relatively new word, only having come about in the 20th century. While most social work classes discuss empathy to some extent, few schools have incorporated the latest research into the curriculum. But Gerdes believes they soon will, because empathy is an important concept for both social workers and the general public.

Four Week Series: Conflict and Empathy http://j.mp/ZQ1Iab ;Pattie Porter (The Texas Conflict Coach) Interviews Edwin Rutsch Part 1: What Does Empathy Got To Do With It? For many of us engaged in conflict or embroiled in a dispute, i…

by Vasilis KarathanosWhen we answer the question “Should family physicians be empathetic?” in the affirmative, we are saying yes to empathy as it is defined by Hojat et al, who state that the concept of empathy must be limited to its c…

Posts about Neurobiology of empathy written by psychneuro  Our ability to express empathy is vital for our emotional and social functioning and well-being. As humans we are evolutionarily social beings, and as many of us have come to realize …