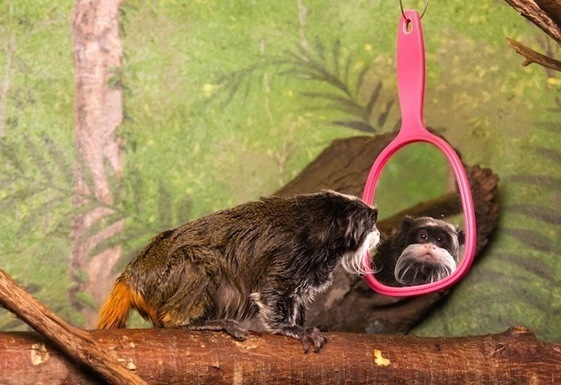 Last year I suggested that mirror neurons are the most hyped concept in neuroscience. Discovered in the 90s by neuroscientists in Italy studying monkeys, these are motor cells in the brain (involved in the control of movement) that are also activated – mirror-like – by the sight of the same movement by others. Thankfully a new open access review has just been published that provides us with a calm update on what we know so far about these fascinating cells.

First, here’s some background on the hype. Neuroscientist V.S. Ramachandran says these cells shaped our civilisation; in fact he says they underlie what it is to be human – being responsible for our powers of empathy, language and the emergence of human culture, including the widespread use of tools and fire. When mirror neurons don’t work properly, Ramachandran believes the result is autism.

“Humans aren’t as good as we should be in our capacity to empathize with others. So maybe part of our formal education should be training in empathy. Imagine how different the world would be if in fact we taught ‘reading, writing, ari…

Richard J. Davidson 4. Caring for others. Prosocial behaviors such as empathy, compassion and gratitude comprise another component of well-being. There’s substantial evidence to suggest that engaging in acts of generosity is a very effective…

One of the nation’s leading cancer centers is breaking ground with research that aims to prove that physicians can be taught to communicate with more empathy.Teaching EmpathyAt Memorial Sloan Kettering Cancer Center, where a prognosis can be life-alter…

The head of General Electric says there’s good reason to sympathize with the movement’s economic frustrations.   A handful of financiers have broken ranks to support Occupy Wall Street, and some big business leaders are urging empathy …