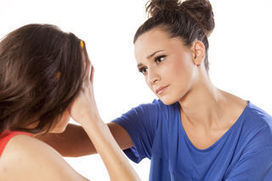 What Empaths Would Never Say

Still unsure about the distinctions between empathy and sympathy? Consider these four examples of statements you may think sound sympathetic but are, in fact, the very opposite of empathic responses.

The irony here is that the speaker actually believes that what they’re saying in these examples will both benefit the listener and establish a bond between them. In reality, nothing could be farther from the truth.

1. “I know exactly what you are feeling. I’ve been there, done that.”

Are we hard-wired to empathize with others? Has the ability given us an evolutionary advantage? What roles have religion and culture played? And if empathy is so much part of who we are, why is it so easy to demonize our enemies — and even enjoy other…

Paul Bloom’s recent New Yorker essay, “The Baby in the Well,” has created a small internet stir by calling out the many vices rather than the oft heralded virtues of empathy—a major academic and self-help trend. Bloom’s ba…

We all want the children we care for to be empathetic but as teachers and families, can we in some way make them be empathetic? This workshop discusses the value of empathy and how to cultivate the conditions to help empathy grow in our homes and class…